This article has been syndicated at www.NewsReleaseWire.com/256244 What does it mean to be syndicated? See end of article.

The recent international attention of the finding, saving and conservation of the mural painted during the Depression Era for the Richmond California Post Office as WPA sponsored art has been noticed by radio and webinar interviewers throughout the United States and also in the UK. Perhaps it was because Victor Arnautoff was the artistic director for the murals in the Coit Tower in San Francisco and was a protege’ of renown artist Diego Rivera?  Perhaps it was the story of lost federal treasured art that was found again, cared for, preserved, restored and redisplayed for the public? 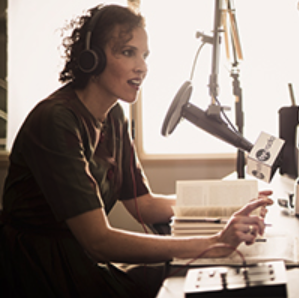 During a remodel of the “old post office” lobby, the 1941  6′ 6″ X 13’4″ historical WPA mural of “Richmond Industrial City” depicting prominent people and places in Richmond… was not considered, at the time, so historically important… and the artist, Victor Arnautoff was a prominent figure in New Deal art projects, a national federal program and a protégé of Diego Rivera! 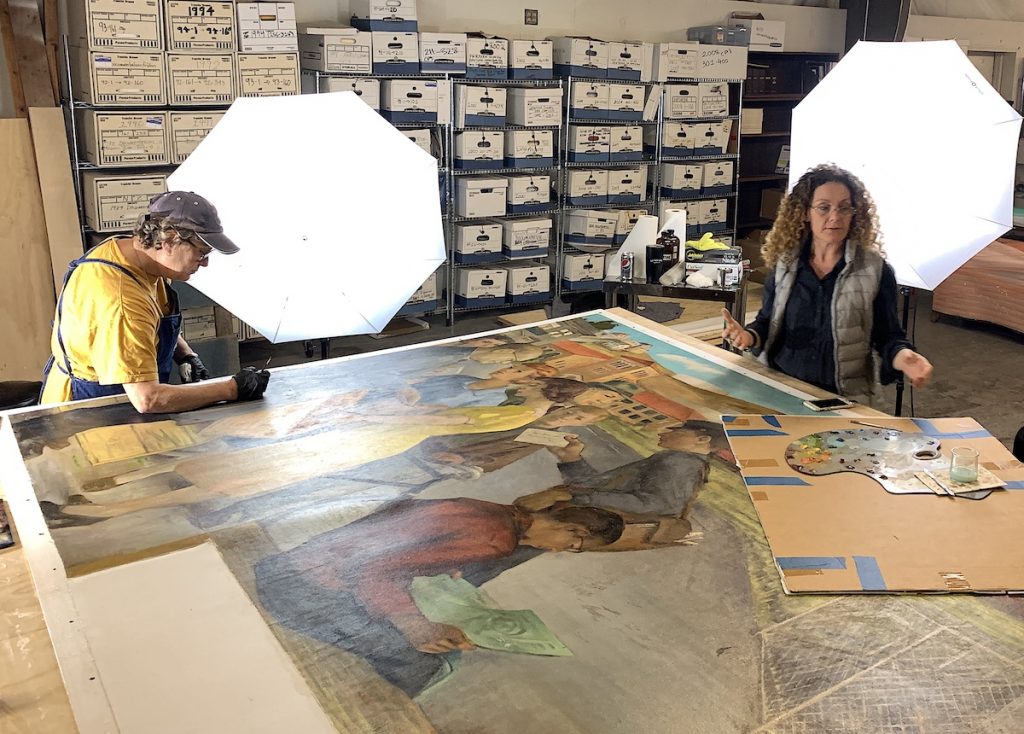 Out of sight out of mind, it languished forgotten in the basement for decades. Then, in 2014, Executive Director, Melinda McCrary at the Richmond Museum of History and Culture learned that a mural had once graced the post office lobby. She took charge in the hunt for this important large painting that had been “lost” and her search lead her to the janitor for the post office and they found a huge triangular crate in an unlit room, the label clearly identifying it as the missing mural. Besides poor handling in storage, flooding in the basement had to be dealt with! When the crate was finally opened, there was a collective sigh of relief when it was realized that even though there was a water stain on the outside of the crate, the mural roll appeared unaffected.

Even though getting the USPS authorities to take action was difficult,  there was no question at the Richmond Museum of History and Culture that the City’s heritage was documented and that this mural was a legacy of valuable public art.

Scott M. Haskins and Fine Art Conservation Laboratories, the art conservation firm gave two webinars sponsored by the Richmond Museum to rally the troops and support for the restoration of the mural. Not only did the community learn about the interesting aspects of the mural’s history and restoration but there was also presented  super interesting educational presentations on what attendees can do on their own to “save their stuff,” or preserve collectibles, heirlooms and family heritage at home or the office. Mr. Haskins is a world renown author of several books on this subject and makes it a lot of fun.

“This is a compelling work that captures the diversity of Richmond, a blue collar community,” says Melinda McCrary, the Museum’s Executive Director. “A wide range of occupations, ethnicities and scenery demonstrate what life was like in those days. Richmond was a working-class American community. It’s a celebration of life that was especially created for this community.”

“When Arnautoff, of Russian origin, painted the mural, he was one of the most prominent and influential members of San Francisco’s art community. Between 1932 and 1942, he completed 11public murals, the best known of which is City Life (1934) at Coit Tower in San Francisco. The Richmond Post Office mural was Arnautoff’s last mural of this size and the first time since Coit Tower that he chose to depict a mix of city people going about their daily tasks. His mural presents life in Richmond as of 1941-when America was on the brink of WWII.” 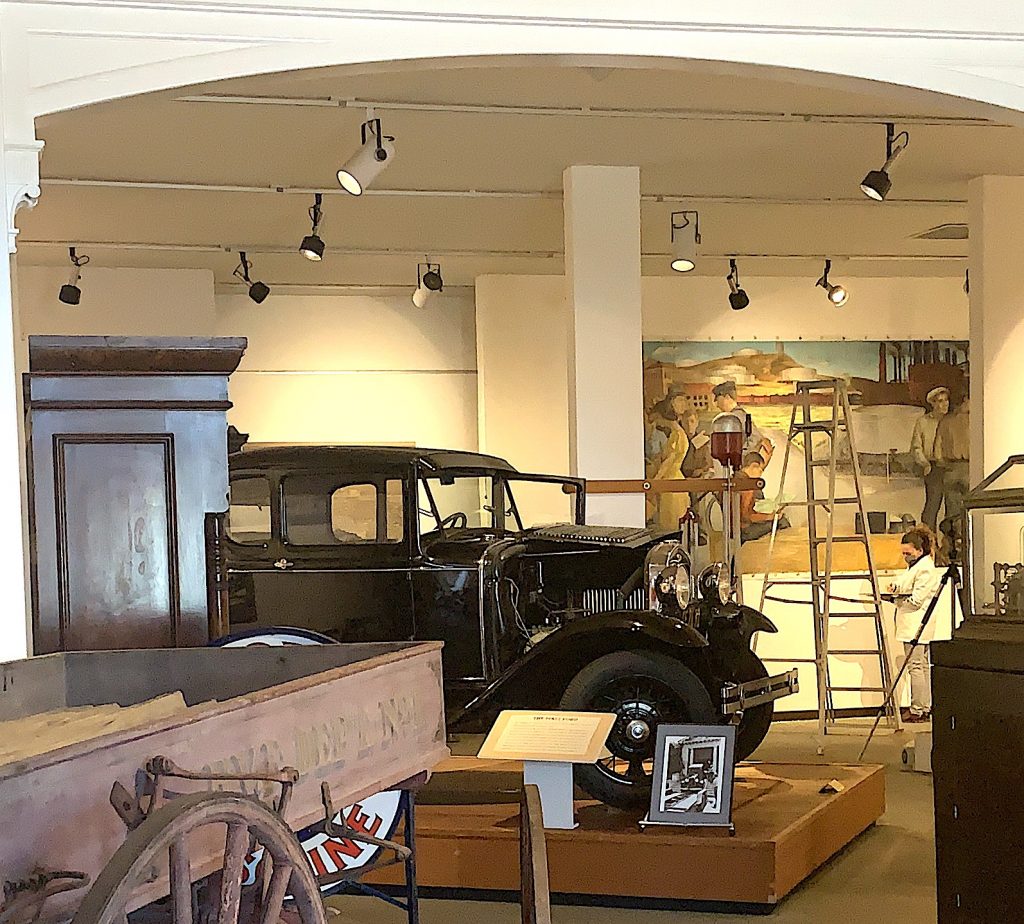 Fine Art Conservation Laboratories was chosen as the “A” team. All of the mural conservation treatments are done with the idea that the mural will last generations into the future. When a paint company tells you about their best quality of paint, they mean it will last 10 years. We think in terms of generations, a century. Everything we do has a long-term future in mind,” says Haskins.

He’s careful to point out that they (the art conservators) are not artists and they don’t do anything creative. What they do is painstaking labor that requires some detective work to determine how and why the original materials used in the painting fall apart and how they respond to preservation treatments. “The art conservation process involves knowing how the artwork reacts to the environment.” Haskins and his team were trained decades ago in Italy and an impressive history of experience restoring treasured artwork and murals here in the US.

He points out that the government’s goal in funding art like Arnautoff’s was to
establish a legacy. “It was meant to be the artistic imprint on our community,” he says. “From a social conscience point of view, it is definitely worth saving.” Haskins shares Melinda McCrary’s commitment to preserving the mural, “The idea of preserving our heritage and understanding our legacy is very important to the community,” he says. “Richmond doesn’t have a famous cathedral but we do have things that prompt or “trigger” our memory. People tell stories that perpetuate the valor and importance of the times. And this mural is not just a decoration.”

Restoration of Richmond an Industrial City was completed in October 2020. 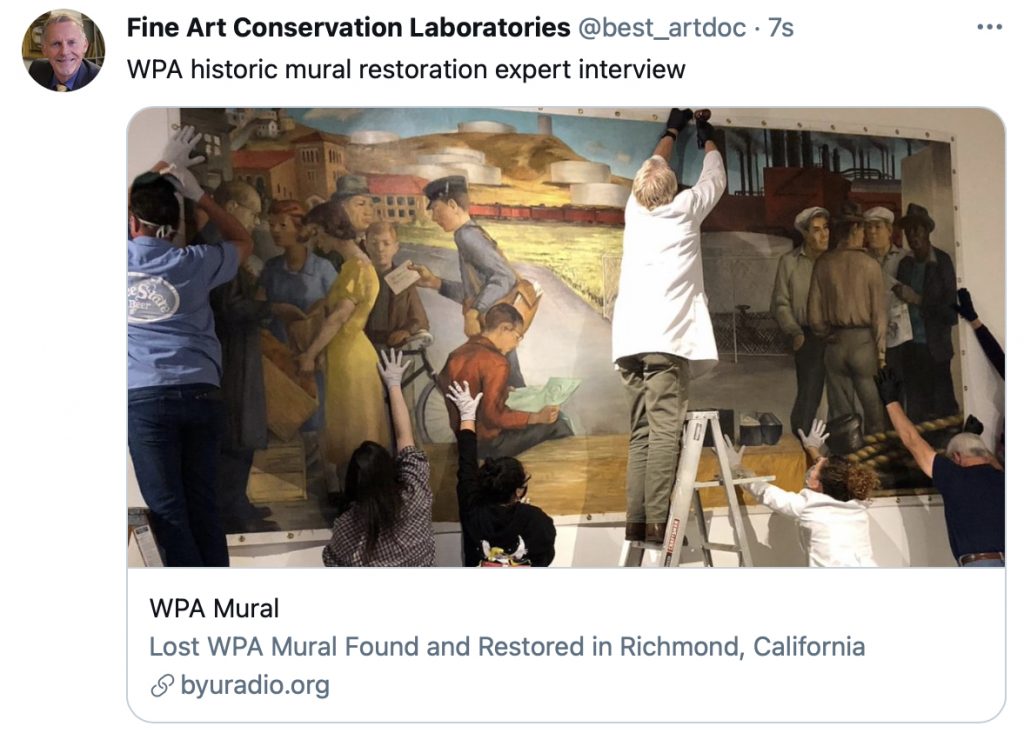 Testimonial by Executive Director of the Museum, Melinda McCrary for WPA Mural Conservation and Reinstallation https://youtu.be/d0vqElVqgpA

Testimonials for other projects of the mural conservation services are on this playlist: https://www.youtube.com/playlist?list=PL41D80C1C65FF2CE7

The video of the project is: https://www.youtube.com/watch?v=_4Bi0-8oZ6M

Call Scott M. Haskins for more information… or for a tour of the art conservation laboratory in Santa Barbara, CA. 805 564 3438 faclofficemanager@gmail.com

International coverage of this project by The International Institute For Conservation: https://issuu.com/nic_iiconservation/docs/nic-magazine-apr-may-2021_issue-83_issuu/18?fbclid=IwAR1ybiG5BCTASdQeJx1PNIArqvL_FcenwnhAOwUUYKN8YnFDhGPV_OJdnSY

When something is published, usually by a news source, and is made available through different venues for redistribution then it is said to be syndicated. Publications that are syndicated are usually considered of value as being from an expert, educational, new worthy or valuable for wide popular interest. See syndication page at the renowned publicity site: www.NewsReleaseWire.com/256244

Scott Haskins has been in professional art conservation since 1975, specializing in the conservation/restoration of easel paintings, murals and art on paper. FACL, Inc. is known nationally for doing A+ work no matter the size or difficulty of the project. We are happy to do a quick cleaning on a family heirloom. Our client list and resume is also full of very satisfied clients of large, difficult/complicated projects at remote locations. Excellent services are also available as an Expert Witness/Legal Testimony in art related matters. Consultation on art related projects occur regularly including extensive insurance evaluations for insured or insurer. Services are offered worldwide. Scott M. Haskins is also author of the "Save Your Stuff" series, educational information, materials and supplies to help people protect and save their treasured family heirlooms and collectibles at home and office. He can be reached at 805 564 3438. Video and written testimonials at https://www.fineartconservationlab.com/testimonials/
View all posts by Scott M. Haskins →
This entry was posted in FACL in the media, Murals, Professional activities, Saving Public Art and tagged WPA Mural Restoration. Bookmark the permalink.