Removing Murals To Save Public Art In Austin, Texas

This article was syndicated for USA national redistribution. Its a bit of a coup to get an article syndicated, and its certainly prestigious, as additional “proof” that the info and the author are considered far and wide authoritative and an expert in the field. So, enjoy and trust our content!! What does it mean that this article is “ syndicated”? See end of article for explanation.

Citizens in Austin, Texas, for months, protested a plan to wall off a pair of masterpiece Mexican murals painted by Mexican artist Rafael Navarro Barajas in in Mexico in 1967. Now, it sounds like they will be saved for future generations.

As reported in the newspapers, the building’s renovation plan had called for the murals to be hidden from view behind walls. But knowledgeable art experts and enthusiasts alerted the arts and historical communities that the murals were in danger, after spotting signs about the plans posted near the murals. Since the announcement, an effort to save them has been made by contacting dignitaries, preservationists and museum leaders.

On March 4, Dan Minning, a representative for Lillibridge, said that his company would not encapsulate the murals after all. “I am happy to report that we have been working with expert art preservationists,” Minning said in an email, “and they have determined there is a safe method for preserving and relocating the murals. We are working with them and others to find an appropriate museum or location for the murals to be preserved and displayed.”

Sylvia Orozco, director of the Mexic-Arte Museum, was delighted by the news.”The preservation of the Rafael Navarro Barajas murals (is) of great importance for the Mexican and Mexican American as well as the general community in Austin,” she said. “Mexic-Arte Museum is interested in pursuing the possibility of permanently housing the murals (here).”

The midcentury-style Medical Park Tower was designed in 1967 by the noted firm Fehr & Granger. The two beloved murals are both 9-by-29 feet and covered with a complex cosmology. As reported by the Statesman in 2018, the origin of the murals can be found in a paper written in 1967 by Thomas M. Cranfill. “On the afternoon and evening of Aug. 25, 1967, a brilliant company gathered in the ancient Teatro Arbeu in Mexico City to see for the first and last time in Mexico the two murals Rafael Navarro has executed for Medical Park Tower in Austin,” Cranfill wrote. “The murals, oil on canvas, each 9 feet tall and 29 feet long, are soon to be divested of their stretcher sticks, rolled up, and sent to Austin.”

Navarro Barajas, born in Michoacan, Mexico, of Tarascan background, studied at the San Carlos Academy of Art in Mexico (with Manuel Rodriguez Lozano and Armando Valdes) and then went to Paris for further study. He worked in traditional genres, including portraits, landscapes and still-life drawings and paintings.

“Such great news,” said Travis County Commissioner Brigid Shea about the new plans. “On behalf of the Consulate General of Mexico in Austin and the government of Mexico, many thanks for preserving these murals,” said Deputy Consul Jorge E. Salcido Zugasti, “which are (the) cultural heritage for both our countries.” 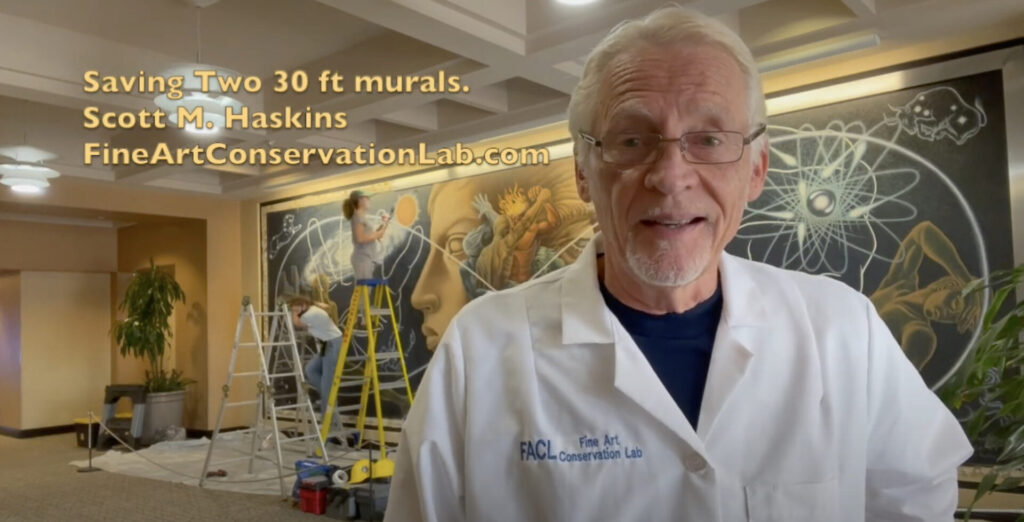 Fine Art Conservation Laboratories (Scott M. Haskins) was chosen to undertake the sensitive, high-profile project. This video shows the process of removal. Carrie Holt, Lillibridge’s General Manager, had this to say, “We recently had the pleasure of working with Scott Haskins and his team from Fine Art Conservation Laboratories for the purpose of removing the Rafael Navarro murals from the building that is undergoing extensive renovation. All systems and all surfaces of this 55 year old building are getting touched.

We did significant research mostly through the internet and talking to a local art experts’ who finally referred us over to Scott. And numerous conversations and consultations we had with Scott, we did determine that he was the right person based on his experience, and checking references and all of the people we’ve talked to talk to him, that have worked with him that he would be the right facilitator and conservator of this art.

So, we engaged Scott to come and remove the murals from our building. And, frankly, the process went incredibly smoothly. His team showed up when they were supposed to, they did exactly as they had proposed to us, they had an outline, they told us how they were going to do it, what they were going to do step by step, they followed it, they were on time.

The murals, frankly, were removed from the wall way more smoothly than I would have ever expected them to be. Scott was fantastic about keeping us updated throughout the process, sending us photos, documenting it. So, all in whether it was his office staff that we were working with and signing contracts and negotiating things, or Scott himself and doing the removals and the consultations, they were fantastic to deal with, extremely knowledgeable about their business and what they do. 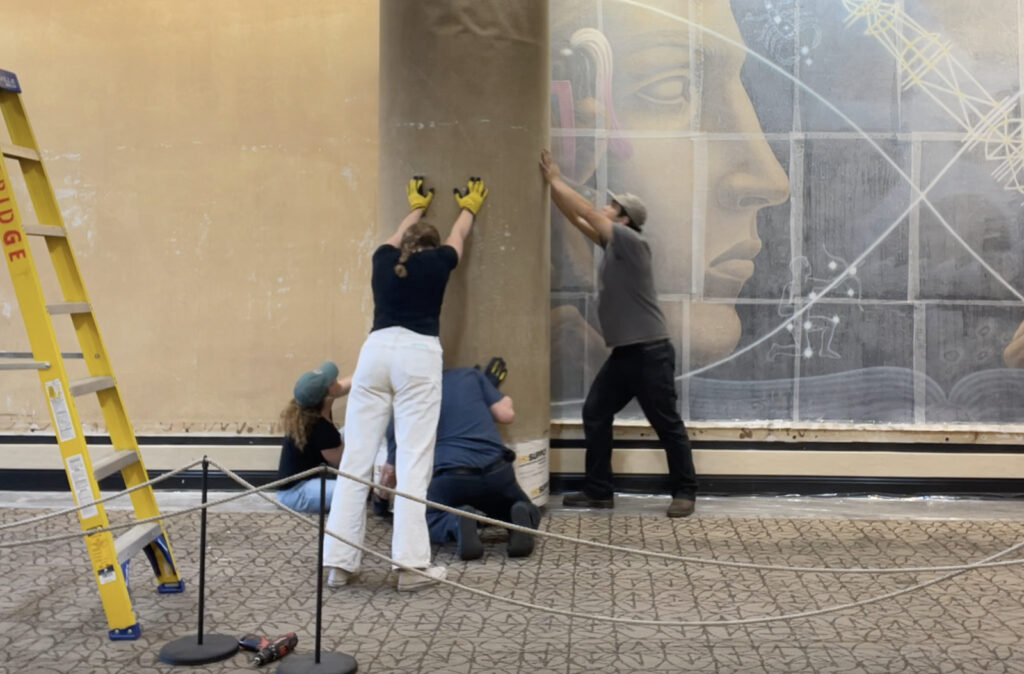 Removal of two 30ft murals from a medical center in Austin Texas.

Since the murals were removed, they have been in the fine art conservation laboratory where they have been cleaned of debris, dust and adhesives that used to hold the mural’s fabric to the wall. The paint layers are also receiving a stabilization treatment to compensate for the stressful process of removal and that will ensure the murals are preserved and will not flake.

Whether the mural’s receive complete restoration now or not is a matter of funding and the final destination/home for the murals. They will be, at least, stabilized and preserved. A schedule and circumstances of their relocation is unknown at this time.

Click on the video below to see the process

Working professionally since 1975 but established in 1986, the firm works on murals nationwide, and extensively throughout Texas such as the national treasure civil rights mural by John Biggers in Houston, the incredibly creative installation of 90 ft of Buck Winn mural in the Alkek Library of Texas State University in San Marcos and the monumental murals of Fair Park in Dallas by Carlo Ciampaglia, among many other mural conservation projects.

When something is published, usually by a news source, and is made available through different venues for redistribution then it is said to be syndicated. Publications that are syndicated are usually considered of value as being from an expert, educational, new worthy or valuable for wide popular interest. See syndication page at the renowned publicity site: https://www.expertclick.com/NRWire/Releasedetails.aspx?id=263007

This article has been syndicated at https://www.expertclick.com/NRWire/Releasedetails.aspx?id=263007

Scott Haskins has been in professional art conservation since 1975, specializing in the conservation/restoration of easel paintings, murals and art on paper. FACL, Inc. is known nationally for doing A+ work no matter the size or difficulty of the project. We are happy to do a quick cleaning on a family heirloom. Our client list and resume is also full of very satisfied clients of large, difficult/complicated projects at remote locations. Excellent services are also available as an Expert Witness/Legal Testimony in art related matters. Consultation on art related projects occur regularly including extensive insurance evaluations for insured or insurer. Services are offered worldwide. Scott M. Haskins is also author of the "Save Your Stuff" series, educational information, materials and supplies to help people protect and save their treasured family heirlooms and collectibles at home and office. He can be reached at 805 564 3438. Video and written testimonials at https://www.fineartconservationlab.com/testimonials/
View all posts by Scott M. Haskins →
This entry was posted in Murals, Saving Public Art, Testimonials and tagged mural removal, mural restoration public art. Bookmark the permalink.

3 Responses to Removing Murals To Save Public Art In Austin, Texas