Mural Conservation of The Contribution of Negro Women in American Life and Education – A National Treasure in Houston, TX

Before Conservation, The Contribution of Negro Women in American Life and Education

This amazing public art, painted in the South in 1953, addresses the several, then, unpopular themes of women’s rights, equality of rights for all races including access to public education, freedom of speech, land ownership. “The Contribution of Negro Women in American Life and Education” was, of course, honoring and remembering the sacrifices of those known African American women in this struggle on behalf of their communities and families. This heartfelt recognition and plea sends a message about human rights equally applicable for all women of all races in all countries. 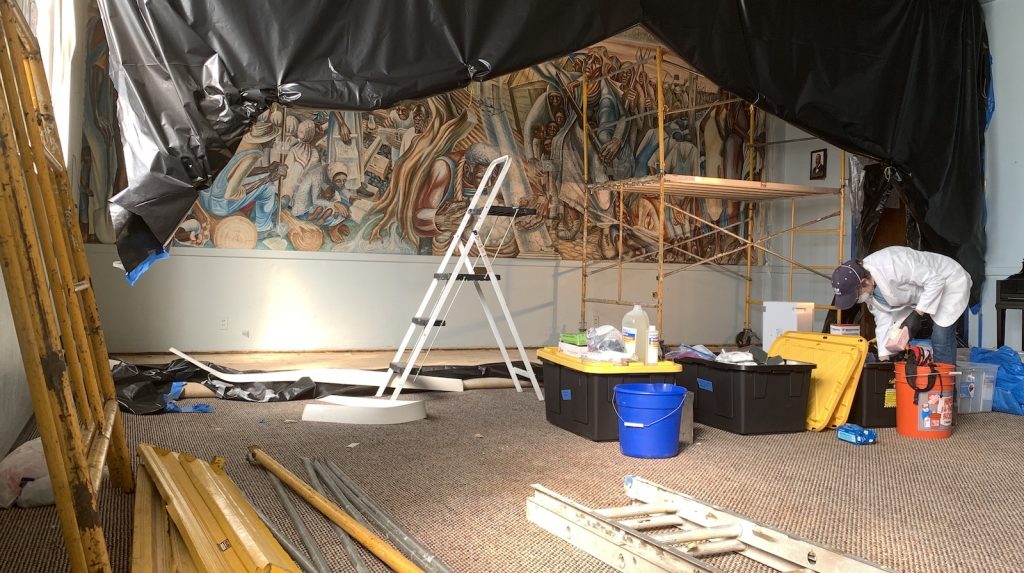 Our set up for the mural preservation and restoration work

Post World War II was a man’s society which obviously placed woman in a minority role. It wouldn’t be for 10 more years that Civil Rights would be an issue that could be improved upon. It was foresight and inspiration that the time was right to prepare for these improvements. The mural was painted in 1953 as a requirement for John Bigger’s doctoral degree from the University of Pennsylvania. In 1949 Dr. Biggers founded the art department at Texas Southern University, Houston, Texas – where more of his works are displayed. This mural was ahead of its time. 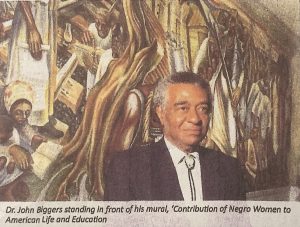 Given also that Dr. John Biggers has become one of the most important African American artists in our US history, this mural has become iconic, even an American National Treasure. It truly touches on the fight for freedom and the American way, liberty and justice for all. 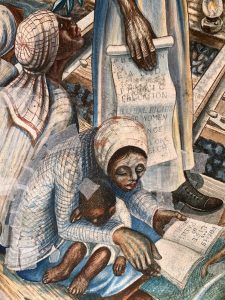 Its easy to imagine, therefore, the emotional outcry when, in the aftermath of Hurricane Harvey in 2017, the building of the Blue Triangle Multi-Cultural Community Center in Houston, Texas (where the mural is housed) was discovered to have been hit hard. The beloved mural suffered extensive exposure to water and was suffering from the predictable onset of mold growth and flaking paint. 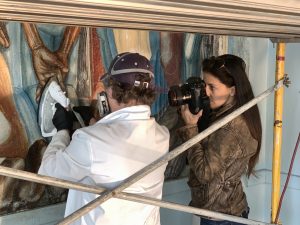 To the credit of the building’s caretakers and administrators, instead of hitting the mural with a mop in a DIY frenzy, professional mural conservation help was sought. Steve Pine, Head of Conservation from the MFA Houston became a valued consultant and angel guiding the inspections, analysis, proposal processes and ultimately he assisted the board of directors of the Blue Triangle Multi-Cultural Community Center in getting professional bids to preserve and restore the mural. 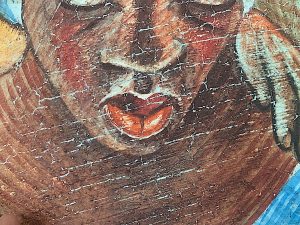 With so many needed repairs at the community center, some might question placing the  “fixing the art” as a high priority… but this speaks well to the love of this mural by the community, the importance of the mural from an art history and public art point of view and the importance the federal funding agencies placed on the artwork as a high priority. 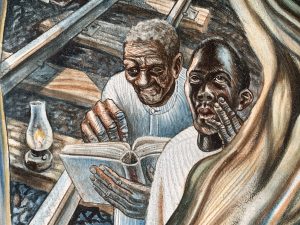 Professional art conservation treatments began in January 2019. The wall had dried out by then and had returned to its previously solid condition, a veritable miracle. Fine Art Conservation Laboratories was represented on site in Houston, Texas by Scott M. Haskins, Head of Conservation with mural conservator from Santa Fe New Mexico, Julie Stephenson to assist. The quality of these conservation treatments and the collaborative team efforts of saving of this important work of art received the prestigious Preservation Houston’s Good Brick Award. 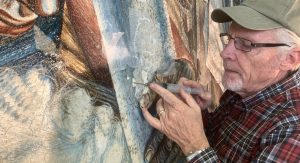 The preservation tasks focused on stopping and setting the flaking, killing the mold and  its abatement, then a cleaning helped and the mural was varnished for future protection. Minimal restorative retouching (called “inpainting”) was required. See the short video at the end of this article for a quick visual of the work.

More than just a decoration, this mural represents the community’s heritage, a legacy and teaching tool for future generations. It’s a memory trigger, to retell history and personal experiences. Its importance to the community in which it was places is huge, but it’s a visual anchor for the State of Texas and the entire nation. Indeed, this artwork is a National Treasure. 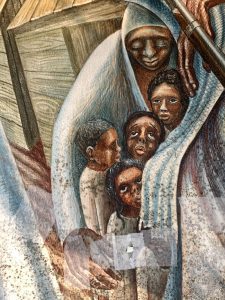 In the history of our country, no more heroic work has been done than that performed by woman. She not only organized the family but has had to lead the struggles to build a society in which that family could grow. She has been the leader in public, rural and informal education… and nothing builds society more than the education of children.

In depicting the contribution of Negro women, it was historically imperative to remember the sacrifices of those known in the struggle of personal and civic rights. The mural symbolizes the sociological, historical and educational contributions of brave women. 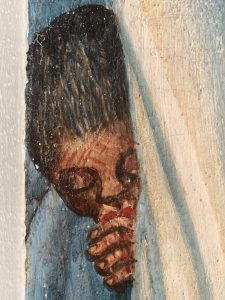 The right side of the mural represents the slavery out of which Harriet Tubmanleads people, symbolized by the Torch of Freedom pushing over the column, tree of life, also supported by man’s labor, embraces the balance of the mural, depicting progress in education, science, music and healthful living with Sojourner Truth as the pioneer teacher. The search for knowledge in a free society becomes available to the old and young, men and women; Phyllis Wheatley appears in the book being read by the mother with the child. All of that embraced by The Tree of Life is in contrast to the hopelessness expressed in the figures at the far right. The church on each side symbolizes the spiritual background of our society. One is also aware of the matriarchal influence of the family as well as the Madonna theme apparent on both sides. 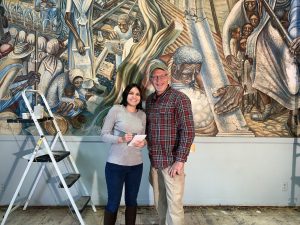 to this wonderful community center and their heartfelt efforts?

See the article from the Houston Chronicle. Click on the link

A quick video of the mural preservation and restoration processes

Special thanks to Head of Conservation, Mr. Steve Pine of the Houston Museum of Fine Arts, for his valuable professional oversight and consultation on the project. This project was done as part of Hurricane Recovery efforts and funded by The Houston Endowment, National Endowment for the Humanities, Texas Historical Commission and the Kinder Foundation.

Scott Haskins has been in professional art conservation since 1975, specializing in the conservation/restoration of easel paintings, murals and art on paper. FACL, Inc. is known nationally for doing A+ work no matter the size or difficulty of the project. We are happy to do a quick cleaning on a family heirloom. Our client list and resume is also full of very satisfied clients of large, difficult/complicated projects at remote locations. Excellent services are also available as an Expert Witness/Legal Testimony in art related matters. Consultation on art related projects occur regularly including extensive insurance evaluations for insured or insurer. Services are offered worldwide. Scott M. Haskins is also author of the "Save Your Stuff" series, educational information, materials and supplies to help people protect and save their treasured family heirlooms and collectibles at home and office. He can be reached at 805 564 3438. Video and written testimonials at https://www.fineartconservationlab.com/testimonials/
View all posts by Scott M. Haskins →
This entry was posted in Murals and tagged Mural conservation. Bookmark the permalink.

24 Responses to Mural Conservation of The Contribution of Negro Women in American Life and Education – A National Treasure in Houston, TX