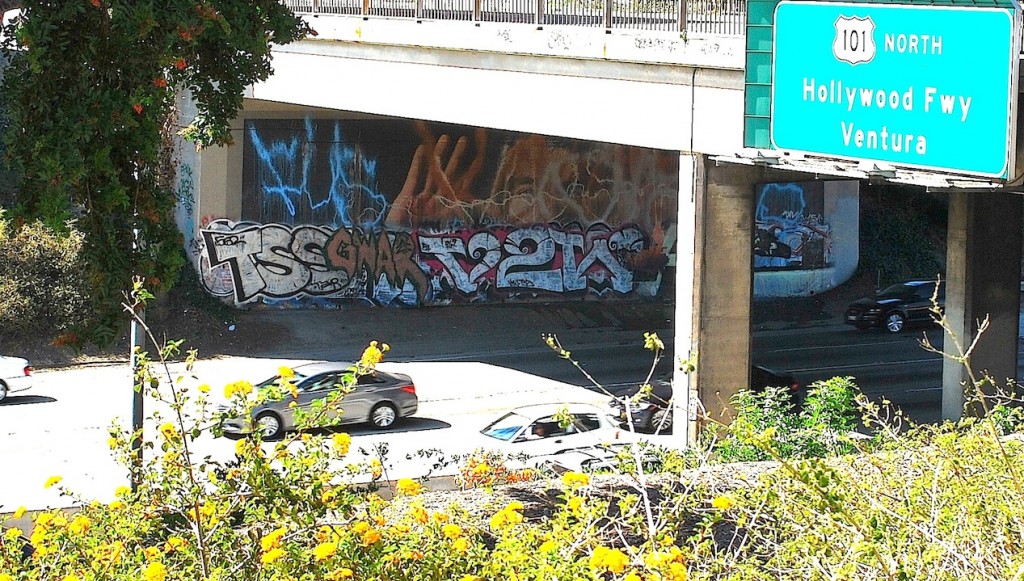 Kent Twitchell painted the mural “Jim Morphesis Monument” as part of a two piece mural called “Altarpiece.” And Altarpiece is part of the 1984 Olympics murals series that adorned our freeways with 12 murals by living masters. The city of Los Angeles undertook the painting of the murals, originally to promote community pride and to put the art where everyone would see it. It was truly a gift to the public. The artists were and are major art personalities in LA and influence 10,000’s of youth with their work and community outreach. What is the “trickle down influence?!

Since their placement on the freeways in 1984, however, the dark influence of vandalism has saddened millions of Los Angelinos and visitors. 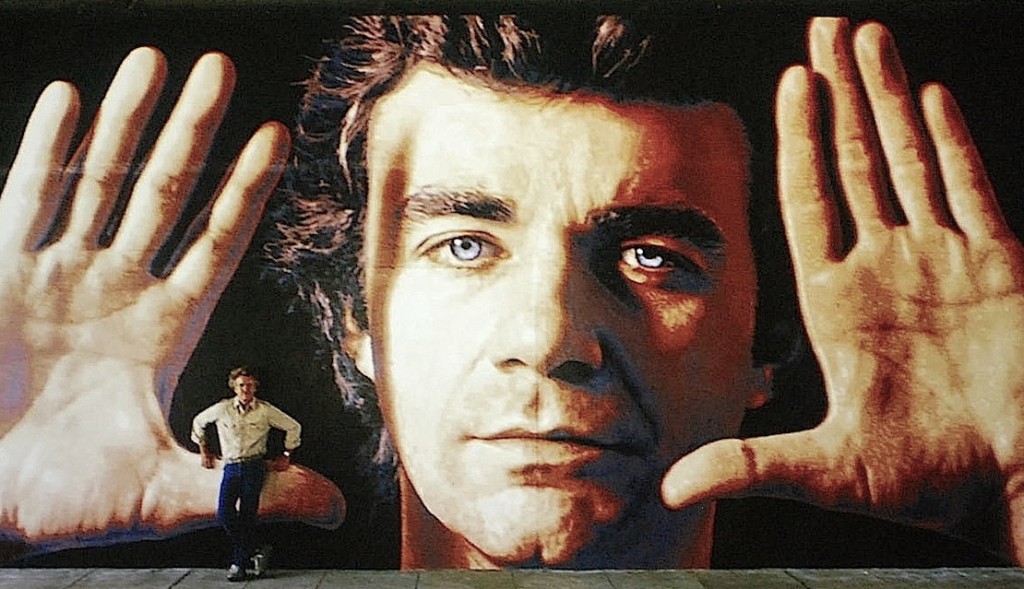 The Jim Morphesis Monument as it looked in 1984 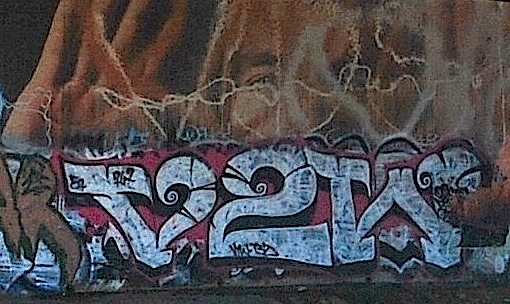 There have been several attempts over the years to restore the mural but efforts have always fallen short when it comes to maintaining them and keeping the graffiti off. Its not because of lack of interest by the public. Whenever there’s a chance for the public to voice an opinion about what to do, it is loud and clear to keep them clean!

These murals are loved by the Los Angelinos! There have been a number of reasons why an ongoing effort hasn’t worked, but it boils down to establishing of a professional, committed organization to follow through and that can and will work well with others.

Enter the picture: The Mural Conservancy of Los Angeles and a partnership with FACL, Inc. (Fine Art Conservation Laboratories) and Scott M. Haskins. MCLA has targeted the saving, protection and maintaining of these 12 Olympic murals from 1984 as their highest priority right now. The problem that motivates MCLA? Caltrans. The highway maintenance department of the State of California, who has a mandate to paint out graffiti, has painted out 8 of the 12 murals much to the despair of artists, art lovers, and the general public which has commented energetically on blogs and websites everytime a mural gets painted out. In fact, leave a comment on this article!

MCLA has been fantastic at raising awareness, making the political connections, fund raising and pulling together the professional organization to get the job done and follow through for the long term. Combine MCLA’s resources, contacts and energy with the preservation and restoration expertise of FACL, Inc. and Scott M. Haskins and there has been great progress! The first mural on the list to benefit from the new partnerships and efforts: Kent Twitchell’s “Jim Morphesis Monument.”

Last week, Scott Haskins met with the artist, Kent Twitchell and Caltrans’ Vincent Moreno to test the cleaning of this first mural and begin the art conservation and mural restoration processes.

Here’s a short video on what happened:
[8pVK8FNvgGg]

Kent Twitchell was blown away by the successful results of these cleaning tests. Its an emotional experience to see a gorgeous work of art buried in filth and darkness and then see it liberated and be resurrected and reclaimed. I was moved also. So, where there was doubt now there is hope and light and we see the way to get the job done. And, in fact, there is a doable plan for FACL, Inc. and Scott M. Haskins to follow through on and do quality, efficient work.

The job now requires doing the paperwork with Caltrans, getting into motion the logistics (which are not a few!) and then scheduling the work. But if the stars align and the traffic gods comply, FACL, Inc. and Scott M. Haskins could be on the wall in three weeks and by the middle of November, you could being seeing the really terrific, world class, colorful mural of Jim Morphesis Monument by Kent Twitchell resurface again.

UPDATE: Go to http://www.savefreewaymurals.com to see FACL, Inc. and Scott M. Haskins in action doing the graffiti removal and art/mural conservation work. Want to see and know the inside scoop on this super cool high profile job that millions see as they drive by? Stay tuned for more videos, soon to appear!

This blog site is the first place the information will be posted.

So, sign up for blog updates NOW! (Upper right corner of page)