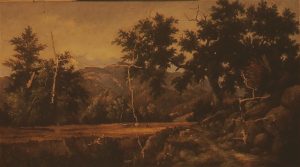 Art restoration has been more than just interesting as my life’s work. Lots of vintage oil paintings pass my way for conservation with a dramatic story attached and so it was with a dirty Barbizon style looking landscape that was ripped to shreds. Like many old paintings, it had old brown brittle ripped wrapping paper on the back… it looked like it had been through a war… and perhaps it had, of sorts.

The artwork in this story was part of “a pile of paintings” found in a storage shed, the damaged dirty oil painting had been thrown away… then fished out and “thrown into a deal” with an art dealer who bought the whole pile. Horse-traded along with other items twice more, it finally ended up in my hands to “save it if you can.” Well, saving and preserving art is what we do! It’s especially satisfying if its historic. Wouldn’t saving and preserving history for future generations give you the good worthwhile feeling of being socially conscientious? At first, all we knew was that it was “oldish” and I guessed that it was from the end of the 1800’s. Origin unknown. 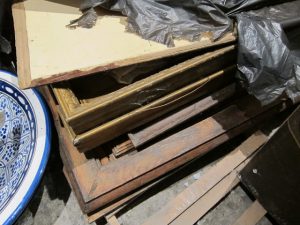 Carefully looking it over I removed the old paper on the back and saw an inscription on the back written in a handwriting style that I recognized! Actually, I was stupefied! This painting’s location was less than a mile from where I live.“ Bishop Ranch – Glen Annie, Santa Barbara, CA.” Wow, it was a California historical painting! I immediately looked on the front of the painting and in the dirty lower left corner was the barely visible monogram of renown early California artist and Santa Barbara resident, Henry Chapman Ford, with the date, 1875.

HCF and I are old friends! My efforts in preserving and restoring his highly desirable, valuable paintings began in 1978 when I moved to Santa Barbara. Almost immediately, however, my awareness of his work went into overdrive when I was asked to help salvage from the outer darkness of “Pigeon Row” storage at the abandoned Mission Inn in Riverside, CA one of the most important historical collections of paintings… considered by many art historians as a National Treasure; The Missions of California… by Henry Chapman Ford. Incredibly important paintings, they helped to define the Mission Style Arts and Crafts movement in the Western USA. Since that time, we have done painting conservation treatments on dozens of other paintings by Ford. All this to say, by the time this painting of Bishop Ranch – Glen Annie came into my hands, I knew intimately the work of Henry Chapman Ford.

To see what happened to this valuable, historical painting, see the end of the article. But the drama of the ripped oil painting’s arrival into my hands is only half the story. The other half is what warring events were happening in Goleta in 1875… giving us a clue as to why the painting was commissioned and by whom. 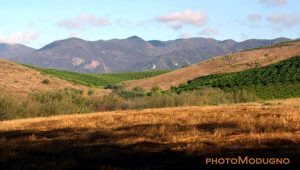 In Goleta, California a few miles up the coast from Santa Barbara between the exits on the 101 freeway of Glen Annie – Storke Rd and Los Carneros on the North side of the road is a beautiful open space with an old ranch house nestled in the trees. That property used to extend back into the hills and up a canyon. To the locals it is known as Bishop’s Ranch but historically it was known as the Glen Annie Ranch of Tecolotito Canyon. 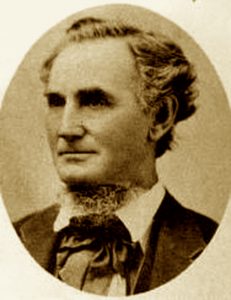 Colonel William Welles Hollister fell in love with this Goleta Valley tract of land the first time he saw it in 1854 as he was on his way to San Francisco. In the 1860’s he returned to Santa Barbara, buying up several Mexican land grants, but couldn’t get the owners of the Tecolotito Canyon area in Goleta to give it up.

The land he lusted after was owned by Nicholas A. Den. But then in 1862, Den died suddenly at only 50 years old. Not long afterwards, the heirs of the Den estate were open to selling off property as they needed additional monies.

Hollister was so in love with this land and so anxious to get it that he hastily purchased 5,100 acres from the family for $10 per acre when the current market value was only 10 cents! He wanted it ASAP, and the Den family eagerly accepted his generous offer. 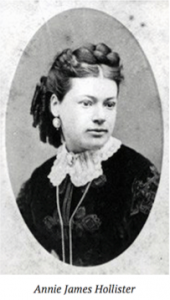 Hollister promptly named his long desired ranch “Glen Annie”, after his wife, and went to work to make it a national showplace. Glen Annie Ranch employed 50 workers, had a full cattle operation, profitable walnut and citrus orchards, and many experimental crops. Date palms thrived and 10,000 almond trees made Glen Annie the largest almond grower in the country. Three of Goleta’s streams ran through the property and was soon covered with orchards of walnuts, lemons, limes and oranges. 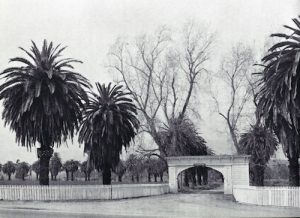 In 1870 things were going well on the ranch. With the date of 1875 on the painting by Henry Chapman Ford, it was possibly a commission during a prosperous time when homes were being added to the property and existing residences upgraded. For Ford, his visibility and notoriety were being enhanced by his undertaking of the painting of the romantic and historic Missions of CA, which he had begun the year earlier, in 1874. Ford received much notoriety and enthusiasm from the public throughout California for his work. Besides being a patron of the arts, Hollister also became one of Santa Barbara’s leading entrepreneurs and philanthropists, financing and developing such projects as the Arlington Hotel, the Santa Barbara News-Press, Stearns Wharf, and the Lobero Theatre. But winds of a legal war were blowing.

Heirs of the Den Family, from whom Hollister bought the property were fixated on irregularities in the hasty purchase 12 or so years earlier and they hired Thomas Bishop an attorney from San Francisco to investigate Hollister’s purchase of the estate without getting approval from the probate court. Suit was filed in 1877 against Hollister, Ellwood Cooper and the Sturges Brothers, (owners of Tecolote Canyon) and the trial was known as the most important land case of the century in Southern California. During the proceedings, the public considered Bishop the villain, breaking out in hoots and catcalls when he spoke in court. 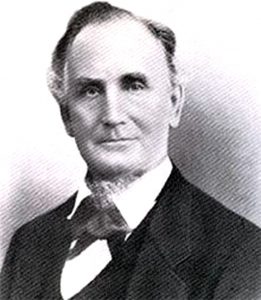 After 13 years of legal battle and acrimonious community dealings, the Hollister-Bishop lawsuit finally ended in 1890, in favor of the Den family estate. Colonel Hollister did not live to see the end of the predatory and expensive legal battle but died in 1886. A very popular figure, his three mile funeral procession was the longest in the Santa Barbara history of public funerals. 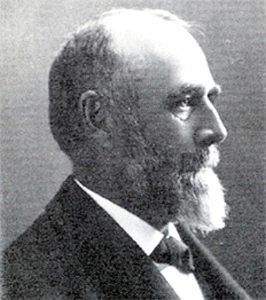 Thomas Bishop received as payment for his successful services the lower ranch of Glen Annie (and changed the name, of course). Bishop’s 240 acre ranch became, for nearly half a century, the largest farming operation in the Goleta Valley.

So, here is an interesting historical dilemma: If Henry Chapman Ford’s 1875 painting with HIS handwriting on the reverse annotating the title of the landscape as “Bishop Ranch – Glen Annie”… how could Bishop’s name be on it if Bishop didn’t own the land till 1890?!?! And given the rancor feelings from the lawsuit, would the name Glen Annie have survived the change-over in ownership in the community? And, its interesting that the landscape in the painting is clearly the canyon, which was not part of Bishop Ranch, but instead the Tecolotito Canyon property which was split off.

Since that time, the land has been through disputes between the Bishop Ranch and the United States Bureau of Reclamation, Crown Financial Interests of Chicago the owners of the NYC Empire State Building, land developers, the City of Goleta and most recently, the residents of the community of Goleta.

So, how did we save this painting, this “historical document” (if you will), this piece of our community’s heritage, you ask?


And this is why we do NOT patch paintings: https://www.youtube.com/watch?v=xOk0vk3w5zs

Inspired by an article in GOLETA HISTORY. A couple of years ago, Tom Modugno published an informative article on Bishop Ranch here in Goleta.

Scott Haskins has been in professional art conservation since 1975, specializing in the conservation/restoration of easel paintings, murals and art on paper. FACL, Inc. is known nationally for doing A+ work no matter the size or difficulty of the project. We are happy to do a quick cleaning on a family heirloom. Our client list and resume is also full of very satisfied clients of large, difficult/complicated projects at remote locations. Excellent services are also available as an Expert Witness/Legal Testimony in art related matters. Consultation on art related projects occur regularly including extensive insurance evaluations for insured or insurer. Services are offered worldwide. Scott M. Haskins is also author of the "Save Your Stuff" series, educational information, materials and supplies to help people protect and save their treasured family heirlooms and collectibles at home and office. He can be reached at 805 564 3438. Video and written testimonials at https://www.fineartconservationlab.com/testimonials/
View all posts by Scott M. Haskins →
This entry was posted in Disaster/Emergency Response, Painting on canvas and tagged painting restoration, repair a rip. Bookmark the permalink.