Iconic Mural Painted Out Instead Of Removing Graffiti On 110 Freeway in South Bay, Los Angeles 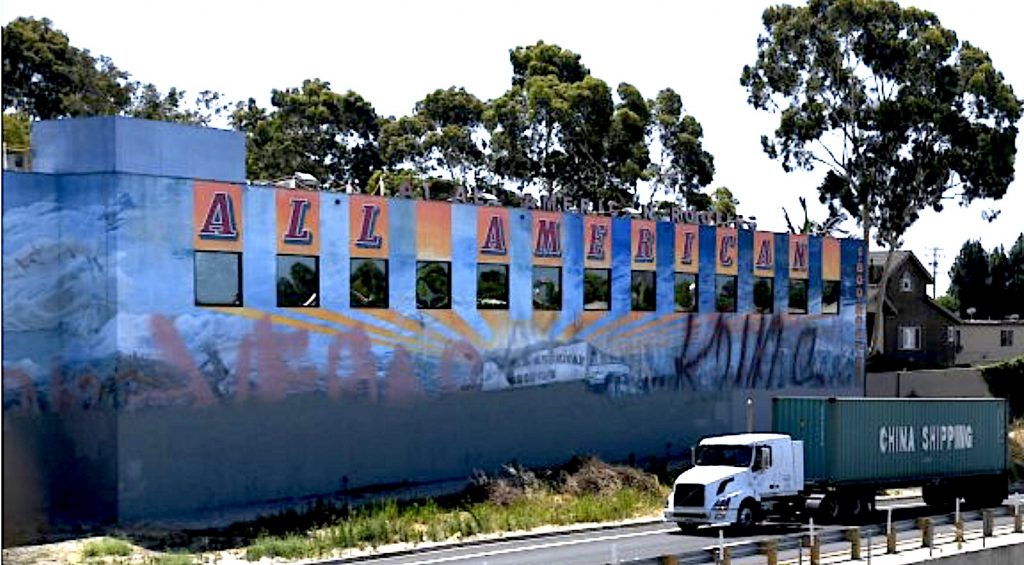 Veteran journalist Nick Green called me on the phone asking intelligent questions about the legalities of painting our murals and what rights artists have. We also discussed the options of future mural restoration, protection of public art, cleaning off graffiti and restoring these murals that should be valued public art that give character to a city that we could be proud of but instead we have graffiti and vandalism that give character to our environment.

Mr. Green is the beat reporter for the cities of Torrance, Carson and Lomita and also covers the South Bay for the Daily Breeze. He has worked for newspapers on the West Coast since graduating in 1987 from the University of Washington and lives in Old Torrance with his wife and two cats. He did a good job asking questions thoughtfully about a mural on the backside of a roofing company that faces the 110 Freeway and was painted over in Carson on Wednesday, July 8, 2020. (Photos by Brittany Murray, Press-Telegram/SCNG)

Long Beach artist Roy Herweck took about a year to create the massive 31 feet high and 161 foot long, very noticeable “South Bay Mural” that gabillions of passing motorists have seen since its creation more than two decades ago. 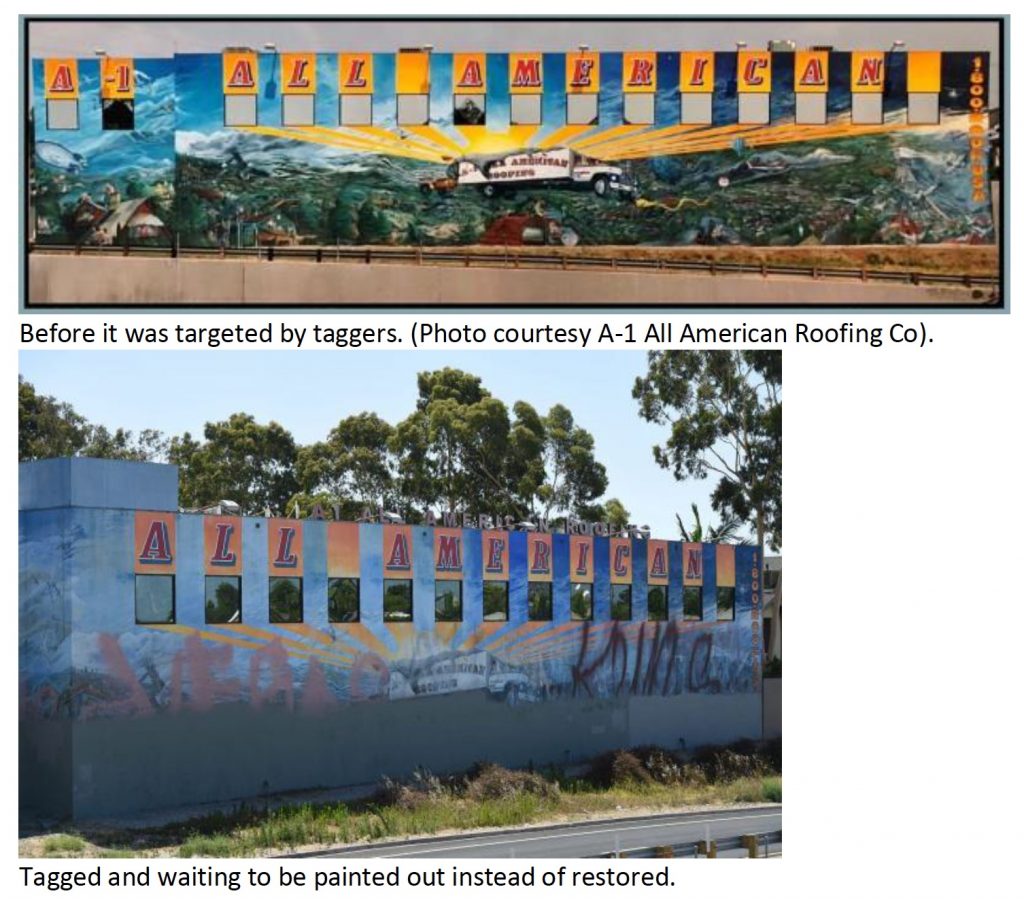 Vandalized over the years into a graffiti-ridden eyesore, the recent painting-out job was done at the request of the building’s owner, who initially commissioned the piece of public art-cum-advertisement in 1996.

“That’s the biggest mural I ever painted and I’ve painted 100 murals probably,” said Herweck, who is now in his mid-70s. “For me, it was an homage to the South Bay.” The equivalent of a three-story building and as long as half a football field — the massive mural depicted an aerial view of the South Bay at dusk, complete with a full-size image of a roofing truck and trailer, with a fireball-like setting sun behind it. But for such a huge mural, it was the small details that made it special. Passing motorists often pulled into the roofing company’s parking lot to inspect it more closely, according to a 1997 Daily Breeze article on its completion.

But now it has all but vanished — in what for Herweck was an unwelcome surprise.. The industrial neighborhood is hit often by taggers. At first, the graffiti vandals appeared to respect Herweck’s work and left it largely alone. But gradually, as the years passed, taggers disregarded the community’s love affair.

“It’s been shining its sun on the 110 Freeway for 23 years,” emailed Allen James, who works for the roofing company and whose office is under the letter “M” in the word “American” on the mural. “I just looked out the window to notice that the grey wall across the 110 was just tagged within the last hour,” he added in an email last month. “The graffiti is getting out of control here.”

Caltrans spokesperson Michael Comeaux confirmed via email that the agency painted over the mural with gray paint at the request of the building owner.

“A Caltrans crew was covering up graffiti in the area when the owner of the building, A-1 All American Roofing, came out and asked them if they could please cover up the graffiti – much of it profane graffiti, – which defaced the mural,” he wrote. “The crew complied with his request. The owner was present when the crew sprayed it.”

But Herweck, who said he ended up paying about one-third of the mural’s cost because it took so long to complete, called the action “illegal.”

He observed that Caltrans did the same thing to several pieces of freeway art commissioned to coincide with the 1984 Los Angeles Olympics. It took a successful lawsuit — and a hefty settlement — by artist Kent Twitchell, who also has one of his famous larger-than-life portrait murals on an Old Torrance building, to get the transportation agency to recognize the value of freeway murals and conserve them.

“Just because an artist sells his artwork doesn’t mean he sold the rights to it,” said Scott Haskins, a professional art conservator, expert in mural restoration and owner of Fine Art Conservation Laboratories, who works on projects around the country, who was involved in  freeway mural conservation efforts at Caltrans’s request. Any legal action would likely be bolstered by the fact Herweck’s mural constitutes a “major” piece of public art, Haskins added. “The gray paint Caltrans uses can also be removed in some cases Haskins said, “although it also depends on how the mural was painted in the first place.” 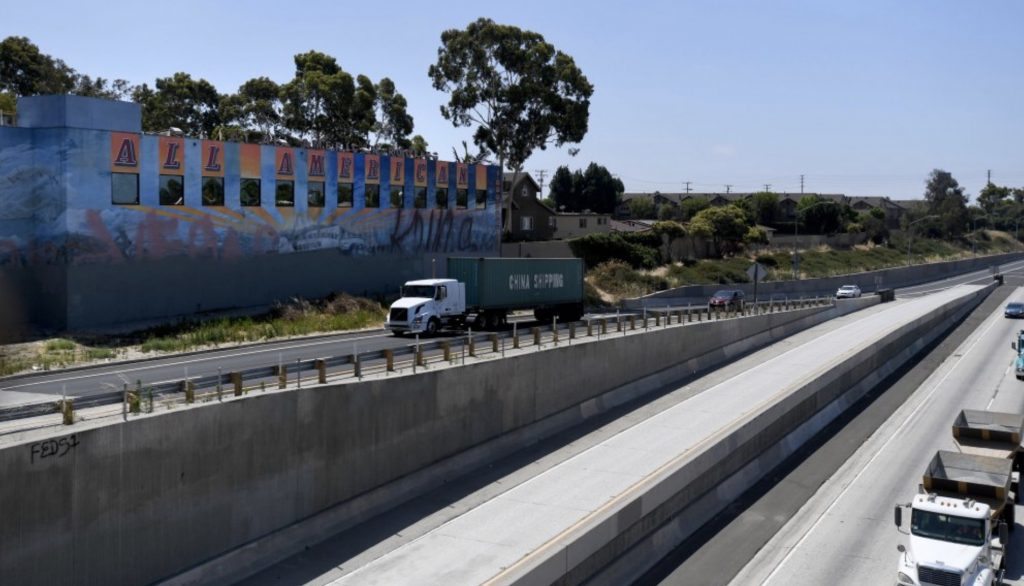 But for Herweck to assert those legal rights, he would probably need to sue, which he said he doesn’t really have the time, effort or money to do. Now all he has left are memories of his dream-like mural and the reaction it evoked from those who viewed it. “I had people stopping by every day when I was painting that mural,” Herweck said. “It was embraced by the community.”

Scott Haskins has been in professional art conservation since 1975, specializing in the conservation/restoration of easel paintings, murals and art on paper. FACL, Inc. is known nationally for doing A+ work no matter the size or difficulty of the project. We are happy to do a quick cleaning on a family heirloom. Our client list and resume is also full of very satisfied clients of large, difficult/complicated projects at remote locations. Excellent services are also available as an Expert Witness/Legal Testimony in art related matters. Consultation on art related projects occur regularly including extensive insurance evaluations for insured or insurer. Services are offered worldwide. Scott M. Haskins is also author of the "Save Your Stuff" series, educational information, materials and supplies to help people protect and save their treasured family heirlooms and collectibles at home and office. He can be reached at 805 564 3438. Video and written testimonials at https://www.fineartconservationlab.com/testimonials/
View all posts by Scott M. Haskins →
This entry was posted in FACL in the media, Murals and tagged graffiti on mural. Bookmark the permalink.