I blogged in January about two murals that we worked on that had a special social message to tell. One is on the Army base in El Paso, Texas and the other is in Houston. The only thing that really connected them to me was their problem of flaking.

The worst flaking I’ve ever seen on a work of art.

In El Paso, Texas you can clearly see Juarez, Mexico on the other side of the freeway… besides the drama of the wall, Juarez’s reputation for lack of law and order are famous and its very interesting to imagine all that goes on over and around that border. Adding to that “vibe” we were feeling was the purpose of our work in El Paso; our mural on the Army Base, Fort Bliss, by World War II prisoner of war, Austrian Crpl Rudolph von Ripper in 1943 entitled “One Nation Indivisible With Liberty and Justice For All” an ideal to be held in the heart of every generation. His perspective was, in part, a product of his hate for the Nazis who had forced him into military service (and his gratitude to be a POW).

Interestingly, the cause of the flaking was magnified significantly by the fact that the mural, at some point about 50 years ago, had a wall built in front of it sealing it in, in order to preserve it against being painted out or…?

Then, un heated/un airconditioned the encasing of the mural resulted in extreme elevated microclimate swings in temperature and humidity when the building was not in use by the military.

The main problem with flaking on murals is that there is always many many more detachments than you can see, called in our industry “blind cleavage.” This mural required out of the box problem solving to preserve the WPA period paint.

The solution was a combination of things; the use of a combination of both low molecular weight and standard use solvent based conservation quality acrylic resins for penetrating consolidation, water based conservation quality acrylic gels in different consistencies, various types of very thin tissues, small brushes, spray equipment, hand irons for setting the flakes once we got the adhesives to penetrate… all these efforts from the hands and minds of 3 experienced art conservators and technicians. It was involved, but successful. 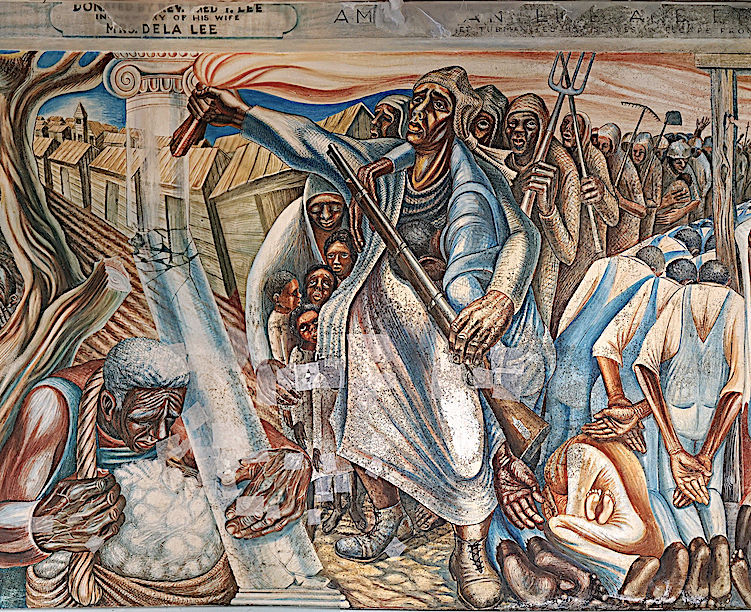 This amazing public art, “The Contribution of Negro Women in American Life and Education”By John Biggers, painted in the South in 1953, addresses the several, then, unpopular themes of women’s rights, equality of rights for all races including access to public education, freedom of speech, land ownership. This mural is, of course, a heartfelt plea for African American women but was equally applicable for all women of all races.

More than just a decoration, this mural represents the community’s heritage, a legacy and teaching tool for future generations. It’s a memory trigger, to retell history and personal experiences. Its importance to the community in which it was places is huge, but it’s a visual anchor for the State of Texas and the entire nation. Indeed, this artwork is a National Treasure.

While the most apparent problem of preservation was the mold, the detachment of the adulterated oil paint from the “plaster” wall was very worrisome given the spongy consistency after the exposure to water.

Once again, like the mural in El Paso, the blind cleavage gave the art conservators reasons to go back over the surface of the mural again and again and again. The technique to setting the original paint layers was, with some variations, the same as Von Ripper’s mural. #JohnBiggers @BlueTriangleCommunityCenter

Scott Haskins has been in professional art conservation since 1975, specializing in the conservation/restoration of easel paintings, murals and art on paper. FACL, Inc. is known nationally for doing A+ work no matter the size or difficulty of the project. We are happy to do a quick cleaning on a family heirloom. Our client list and resume is also full of very satisfied clients of large, difficult/complicated projects at remote locations. Excellent services are also available as an Expert Witness/Legal Testimony in art related matters. Consultation on art related projects occur regularly including extensive insurance evaluations for insured or insurer. Services are offered worldwide. Scott M. Haskins is also author of the "Save Your Stuff" series, educational information, materials and supplies to help people protect and save their treasured family heirlooms and collectibles at home and office. He can be reached at 805 564 3438. Video and written testimonials at https://www.fineartconservationlab.com/testimonials/
View all posts by Scott M. Haskins →
This entry was posted in Consultations, FACL in the media, Historic Buildings - Construction Sites, Murals and tagged flaking paint on murals. Bookmark the permalink.