WPA post office mural has monetary and historical value   Out of public view for almost 30 years, artwork now being restored for display

A piece of artwork that has historical significance, as well as possible significant monetary value, has been hidden away from public view for almost 30 years in a vacant building near downtown Lamesa.

It may have been destined not only to have been forgotten but most probably it would have been a casualty of demolition as the building is not slated for renovation.

But, thanks to the local efforts of Randy Leonard and others, as well as a grant from the Weaver Foundation, that artwork soon will be restored and relocated in another public building where it can be seen and admired by the public.

“The Horse Breakers” is an oil-on-canvas mural that was painted by artist Fletcher Martin in 1939. During that time, Martin – who reportedly was a self-taught artist – was a visiting teacher in art schools in California. He died in 1979 at the age of 75 in New York City.

In 1938 Martin was awarded a commission by the federal agency called the Treasury Section of Painting and Sculpture to paint the mural for placement in the new U.S. Post Office building, which officially was opened and dedicated in March of 1939, in Lamesa.

That federal agency was established as part of the New Deal work programs – often referred to in general as the WPA (Works Progress Administration), during The Great Depression era and under the administration of President Franklin D. Roosevelt, to provide work for qualified artists and decoration for new federal buildings all over the nation.

Sixty-one out of the approximately 1,000 murals – all painted by various artists who were selected for commissions as the result of anonymous competitions – and installed in Post Offices and federal courthouses throughout the United States were placed in Texas. 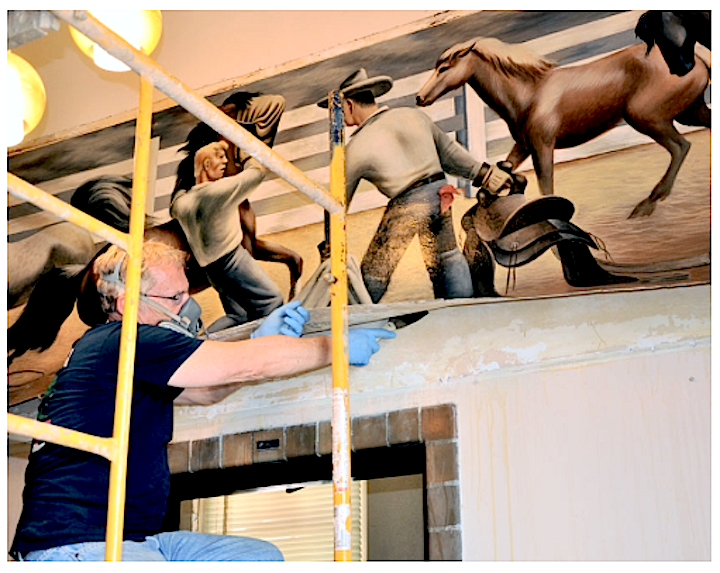 REMOVING THE MURAL: Scott M. Haskins, Conservator of Fine Art, who is owner of FACL (Fine Art Conservation Laboratories), Inc. in Santa Barbara, Calif., is shown (in the photo) working last week to carefully remove the oil-on-canvas mural that was glued to the wall. Mr. Haskins is a highly renown mural expert, nationally. The restored mural is planned for placement in the newly constructed Community Center in Lamesa. (Herrel Hallmark/Press-Reporter)