Painting restoration and cleaning artwork is the subject of what we suspect is humor from Harvard. The award was reported in “Chemistry World” which has been given out since 1991 called the “Ig® Nobel Prize”, “For achievements that first make people LAUGH then make them THINK” 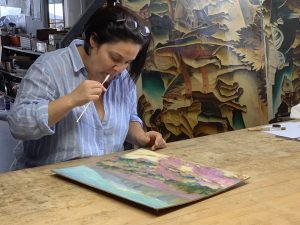 This year’s chemistry Ig Nobel prize has been awarded for showing that human saliva is a good cleaning agent for paintings and historical artifacts. Its not really a traffic stopping discovery… its been part of the restoration processes, probably, for millennia.

The three Portuguese conservation scientists,  Paula Romão, Adília Alarcão and César Viana’s showed in their 1990 paperhow they measured saliva’s effectiveness at removing dirt from antique gilded sculptures. They acknowledged that saliva is often used as a cleaning solvent when working with delicate materials such as gold leaf and ceramics. It si also used for many other artifacts including paintings.

“I know that it seems quite improbable, but human saliva is indeed an effective cleaning agent for surfaces like paintings, sculptures and gilded wood. But don’t try to use it on your kitchen counters,” Romão said in an acceptance video that was played at the awards ceremony at Harvard University.  “The cleaning action is in part due to an enzyme in saliva, α-amylase, which breaks down starch into simple sugars.” 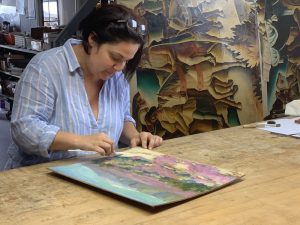 The photographs show Painting Conservator Oriana Monemurro, who has discovered through small sampling tests, that that the gray on the painting is most safely removed with saliva, especially in the areas of the flowers which seem to be the most sensitive to cleaning.

The ancient Roman, Plini the Elder, philosopher, art historian is reported to have declared that more works of art have been damaged by inept over-aggressive cleaning that all the floods, fires, volcanoes and earthquakes in the history of the world. He was well acquainted with disasters; he died in a pyroclastic ocean surge while trying to rescue friends from the erupting of Vesuvius in 79 ad. Saliva would have been a welcomed and acceptable safe method of cleaning to Plini. 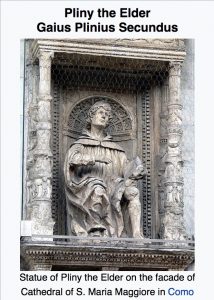 More interesting research taking up the time of Harvard research students and perhaps their grant monies, theIg Nobel Prizesare awarded annually to celebrate improbable scientific research across a variety of disciplines. Among this year’s winners are Marc Mitchell and David Wartinger, who were awarded the medicine prize for using roller coaster rides to hasten the passage of kidney stones, and an international team who won the biology prize for demonstrating that wine experts can smell the presence of a single fly in a glass of wine.

Scott Haskins has been in professional art conservation since 1975, specializing in the conservation/restoration of easel paintings, murals and art on paper. FACL, Inc. is known nationally for doing A+ work no matter the size or difficulty of the project. We are happy to do a quick cleaning on a family heirloom. Our client list and resume is also full of very satisfied clients of large, difficult/complicated projects at remote locations. Excellent services are also available as an Expert Witness/Legal Testimony in art related matters. Consultation on art related projects occur regularly including extensive insurance evaluations for insured or insurer. Services are offered worldwide. Scott M. Haskins is also author of the "Save Your Stuff" series, educational information, materials and supplies to help people protect and save their treasured family heirlooms and collectibles at home and office. He can be reached at 805 564 3438. Video and written testimonials at https://www.fineartconservationlab.com/testimonials/
View all posts by Scott M. Haskins →
This entry was posted in In Lab, Painting on canvas and tagged clean a painting. Bookmark the permalink.