With Brigadier General Chuck Yeager’s passing on Pearl Harbor Day, Dec. 7th last week, a flood of memories of my childhood years came back as I remembered the fascination with the flights to breach the atmosphere with the X-15, the space race and subsequent moon race. Yeager’s critical breaking of the sound barrier in 1947 and in later years his pioneering efforts and influence on the US space industry made him a hero and as NASA Administrator Jim Bridenstine called his death “a tremendous loss to our nation.”

With such a lofty reputation you can imagine my surprise and pleasure when I found out he had acknowledged the importance of and weighed in on a historic preservation project I consulted on at Edwards Airfare base.

This article was syndicated for USA national redistribution. What does it mean that this article is “ syndicated”? See end of article for explanation. 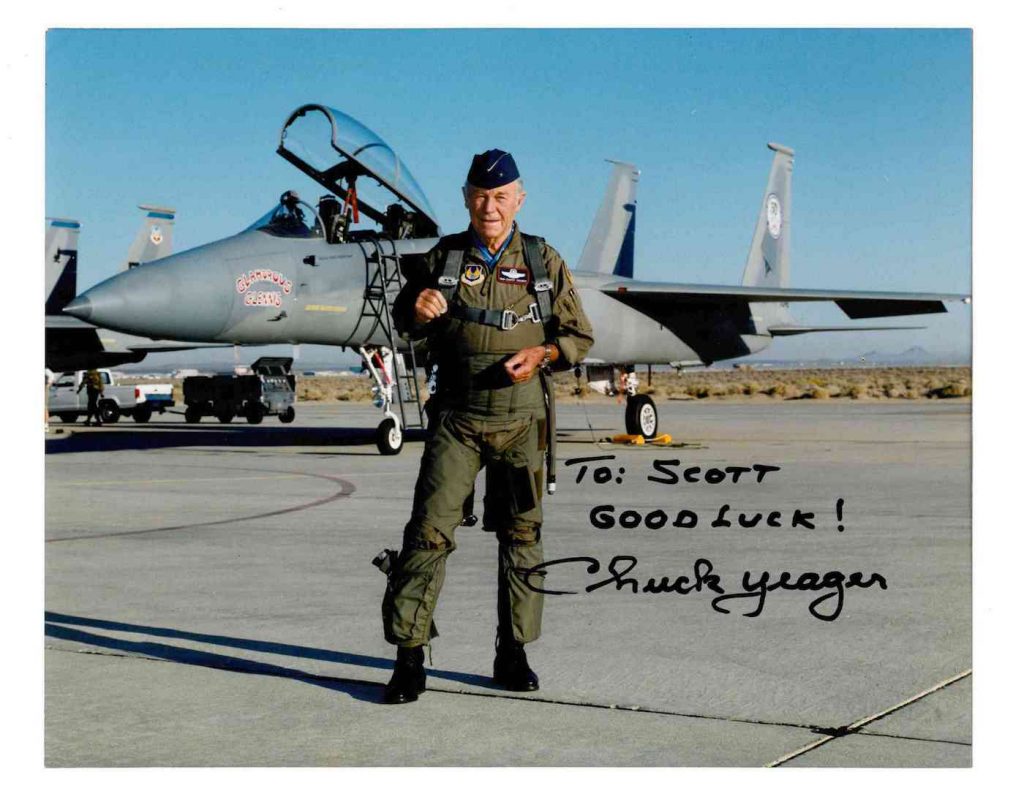 As a renowned Art Conservator, I have shared many times,”Over my decades-long professional career in consulting with people on protecting and preserving our community’s heritage, I’ve had many opportunities to work on military bases on historical murals, mostly. But my visit to Edwards Air Force Base was a bit different… they had a Flyer’s Wall in the Officer’s Club on base with signatures of many great and notable pilots including Amelia Earhart. Major Hutchison, who had solicited my services, was very interested in preserving the historical signatures on the wall as we chatted and made plans. Her testimonial was very kind, “Mr. Haskins, B. Gen Chuck Yeager was here last week and we told him about your wonderful help with the signature wall in P-1. He was enthusiastic, supportive and grateful for your expertise.”  Shortly thereafter, the above wonderful gesture by her and Brig Gen Yeager’s part arrived in the mail, which I was thrilled to receive! I consider Brigadier General Chuck Yeager’s breaking of the sound barrier a major technological and heroic event.

The above example of expert consulting for Edwards Airforce Base is an excellent example of how we can help figure out the details of a potential project. Among the additional services (in addition to art conservation treatments) by Fine Art Conservation Laboratories is our new effort to provide a professional art storage and the associate concierge services. Allow me to consult with you about your art storage needs and other collection care and art conservation issues at your location at no charge (if you are in the many areas of where we provide door to door services throughout SoCal, OC, Inland Empire, Las Vegas, SLC, Thousand Oaks and Santa Barbara). Give me a call on my mobile phone at 805 570 4140 or reach out at faclartdoc@gmail.com. 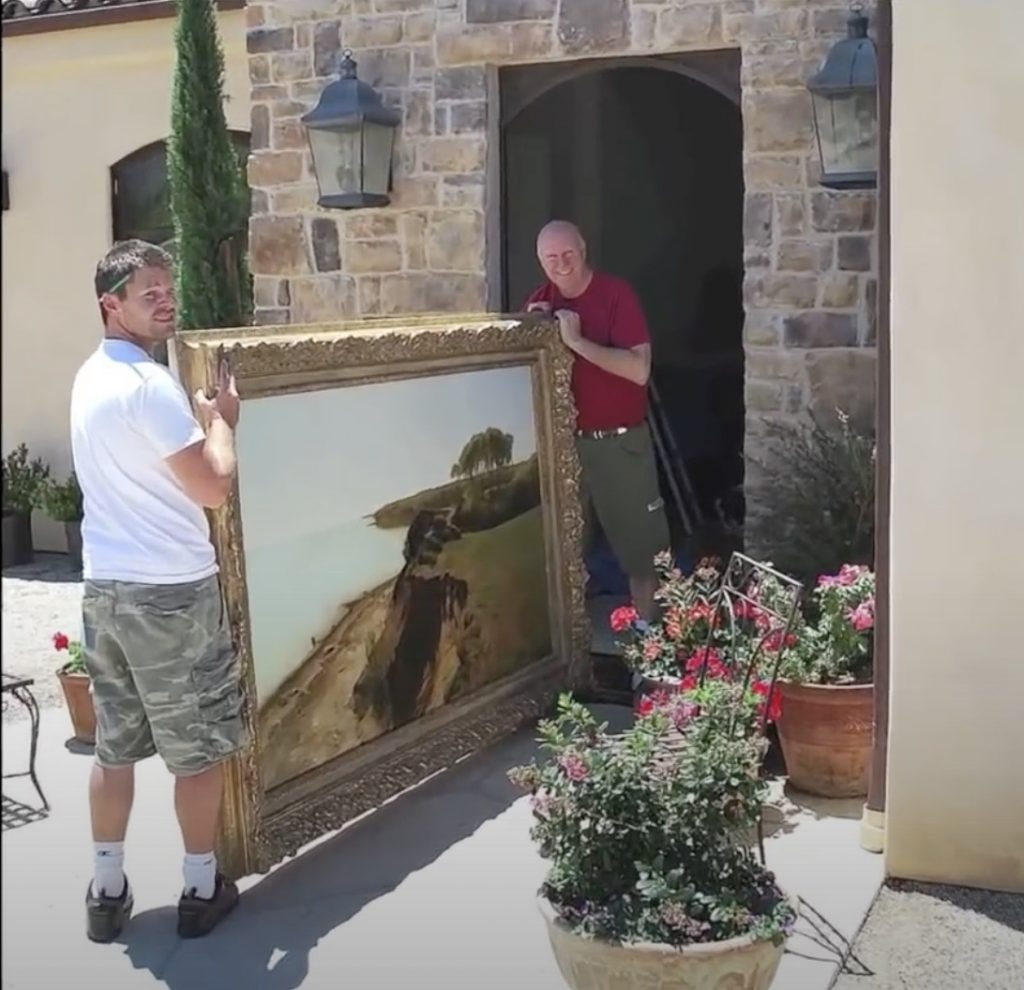 By Tim Stelloh and The Associated Press

Chuck Yeager, a former U.S. Air Force officer who became the first pilot to break the speed of sound, died Monday. He was 97.

NASA Administrator Jim Bridenstine called his death “a tremendous loss to our nation.”

“Gen. Yeager’s pioneering and innovative spirit advanced America’s abilities in the sky and set our nation’s dreams soaring into the jet age and the space age. He said, ‘You don’t concentrate on risks. You concentrate on results. No risk is too great to prevent the necessary job from getting done,’” Bridenstine said in a statement.

“In an age of media-made heroes, he is the real deal,” Edwards Air Force Base historian Jim Young said in August 2006 at the unveiling of a bronze statue of Yeager.

He was “the most righteous of all those with the right stuff,” said Maj. Gen. Curtis Bedke, commander of the Air Force Flight Test Center at Edwards.

“An incredible life well lived, America’s greatest Pilot, & a legacy of strength, adventure, & patriotism will be remembered forever,” she wrote.

US Air Force test pilot Chuck Yeager, stands beside the plane in which he broke the sound barrier, the Bell X-1, nicknamed Glamorous Glennis in honor of his wife, in California, circa March 1949.US Air Force / The LIFE Picture Collection via Getty Images file

Yeager nicknamed the plane “Glamourous Glennis” after his wife.

“Sure, I was apprehensive,” he said in 1968. “When you’re fooling around with something you don’t know much about, there has to be apprehension. But you don’t let that affect your job.”

The modest Yeager said in 1947 he could have gone even faster had the plane carried more fuel. He said the ride “was nice, just like riding fast in a car.”

Yeager’s feat was kept top secret for about a year when the world thought the British had broken the sound barrier first.

“It wasn’t a matter of not having airplanes that would fly at speeds like this. It was a matter of keeping them from falling apart,” Yeager said.

Sixty-five years later to the minute, on Oct. 14, 2012, Yeager commemorated the feat, flying in the back seat of an F-15 Eagle as it broke the sound barrier at more than 30,000 feet above California’s Mojave Desert.

The pilot later commanded fighter squadrons in Germany and Southeast Asia during the Vietnam War and was promoted to brigadier general in 1969. He retired on March 1, 1975.

He became familiar to a younger generation 36 years later when the actor Sam Shepard portrayed him in the movie, “The Right Stuff,” based on the Tom Wolfe book. The book and movie centered on the daring test pilots of the space program’s early days.

Yeager himself even made a cameo as Fred, a bartender at Pancho’s Palace.

Yeager was born Feb. 23, 1923, in Myra, a tiny community on the Mud River deep in an Appalachian hollow about 40 miles southwest of Charleston. The family later moved to Hamlin, the county seat. His father was an oil and gas driller and a farmer.

“What really strikes me looking over all those years is how lucky I was, how lucky, for example, to have been born in 1923 and not 1963 so that I came of age just as aviation itself was entering the modern era,” Yeager said in a December 1985 speech at the Smithsonian Air and Space Museum.

“I was just a lucky kid who caught the right ride,” he said. 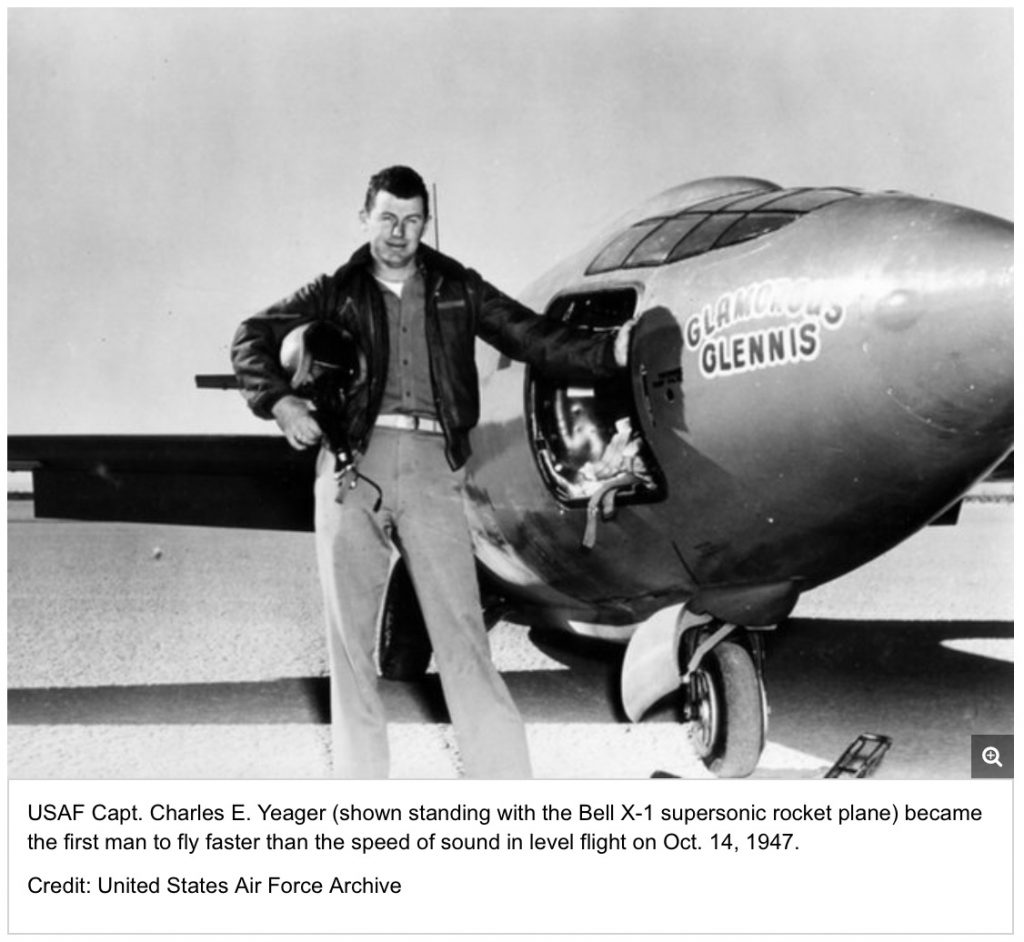 A hero of mine and a great technological feat.

Yeager enlisted in the Army Air Corps after graduating from high school in 1941. He later regretted that his lack of a college education prevented him from becoming an astronaut.

He started off as an aircraft mechanic and, despite becoming severely airsick during his first airplane ride, signed up for a program that allowed enlisted men to become pilots.

Yeager shot down 13 German planes on 64 missions during World War II, including five on a single mission. He was once shot down over German-held France but escaped with the help of French partisans.

After World War II, he became a test pilot beginning at Wright-Patterson Air Force Base in Dayton, Ohio.

Among the flights he made after breaking the sound barrier was one on Dec. 12. 1953, when he flew an X-1A to a record of more than 1,600 mph. He said he had gotten up at dawn that day and went hunting, bagging a goose before his flight. That night, he said, his family ate the goose for dinner.

He returned to combat during the Vietnam War, flying several missions a month in twin-engine B-57 Canberras making bombing and strafing runs over South Vietnam.

“I’ve flown 341 types of military planes in every country in the world and logged about 18,000 hours,” he said in an interview in the January 2009 issue of Men’s Journal. “It might sound funny, but I’ve never owned an airplane in my life. If you’re willing to bleed, Uncle Sam will give you all the planes you want.” 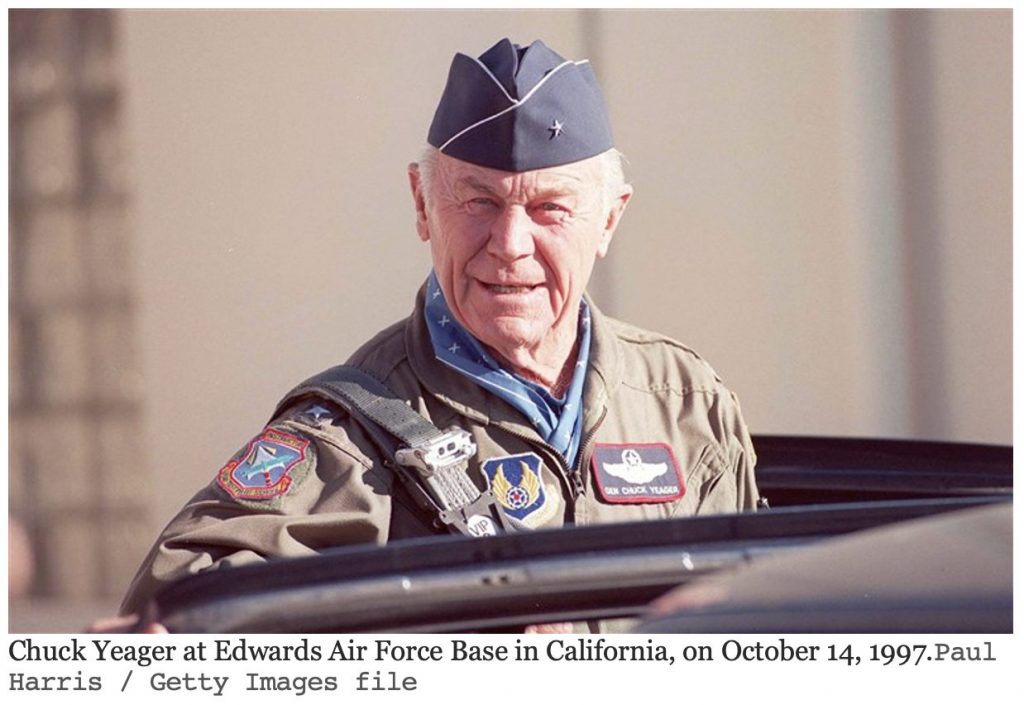 When Yeager left Hamlin, he was already known as a daredevil. On later visits, he often buzzed the town.

“I live just down the street from his mother,” said Gene Brewer, retired publisher of the weekly Lincoln Journal. “One day I climbed up on my roof with my 8 mm camera when he flew overhead. I thought he was going to take me off the roof. You can see the treetops in the bottom of the pictures.”

Yeager flew an F-80 under a Charleston bridge at 450 mph on Oct. 10, 1948, according to newspaper accounts. When he was asked to repeat the feat for photographers, Yeager replied: “You should never strafe the same place twice ’cause the gunners will be waiting for you.”

Yeager never forgot his roots and West Virginia named bridges, schools and Charleston’s airport after him.

“My beginnings back in West Virginia tell who I am to this day,” Yeager wrote. “My accomplishments as a test pilot tell more about luck, happenstance and a person’s destiny. But the guy who broke the sound barrier was the kid who swam the Mud River with a swiped watermelon or shot the head off a squirrel before going to school.”

Yeager was awarded the Silver Star, the Distinguished Flying Cross, the Bronze Star, the Air Medal and the Purple Heart. President Harry S. Truman awarded him the Collier air trophy in December 1948 for his breaking the sound barrier. He also received the Presidential Medal of Freedom in 1985.

Yeager retired from the Air Force in 1975 and moved to a ranch in Cedar Ridge in Northern California where he continued working as a consultant to the Air Force and Northrop Corp. and became well known to younger generations as a television pitchman for automotive parts and heat pumps.

He married Glennis Dickhouse of Oroville, California, on Feb. 26, 1945. She died of ovarian cancer in December 1990. They had four children: Donald, Michael, Sharon and Susan.

Tim Stelloh is a reporter for NBC News based in California.

When something is published, usually by a news source, and is made available through different venues for redistribution then it is said to be syndicated. Publications that are syndicated are usually considered of value as being from an expert, educational, new worthy or valuable for wide popular interest. See syndication page at the renowned publicity site: www.NewsReleaseWire.com/239643

Scott Haskins has been in professional art conservation since 1975, specializing in the conservation/restoration of easel paintings, murals and art on paper. FACL, Inc. is known nationally for doing A+ work no matter the size or difficulty of the project. We are happy to do a quick cleaning on a family heirloom. Our client list and resume is also full of very satisfied clients of large, difficult/complicated projects at remote locations. Excellent services are also available as an Expert Witness/Legal Testimony in art related matters. Consultation on art related projects occur regularly including extensive insurance evaluations for insured or insurer. Services are offered worldwide. Scott M. Haskins is also author of the "Save Your Stuff" series, educational information, materials and supplies to help people protect and save their treasured family heirlooms and collectibles at home and office. He can be reached at 805 564 3438. Video and written testimonials at https://www.fineartconservationlab.com/testimonials/
View all posts by Scott M. Haskins →
This entry was posted in Consultations, Historic Buildings - Construction Sites, Historic Preservation, Professional activities, Saving Public Art and tagged Consultation on Art Related Matters. Bookmark the permalink.