In South Central Utah among the red earth table top landscape filled with dinosaur bones, there is an old coal mining town with a surprisingly good quality WPA mural.

The panorama historical WPA mural is 4′ high and 200′ feet long and depicts the life of the area’s original pioneers and cowboys… truly a time capsule of the Old West. Renown artist, Lynn Fausett, a native of Price, Utah was just the right person in 1938 to pull together this historically accurate mural of his country.

In the pre-war years of 1930’s, the Works Progress Administration (the name was changed to the Work Projects Administration a year after it got started) funded a municipal building in Price that was the perfect place for Fausett’s talents and vision for the mural. Based on photos, entries in archives and his own personal experiences, he planned the composition of this historical rendering of his town for the mural.

This really was the far west of cowboys, bandits and pioneers. Our fantasies of the Old West are mostly made up of romantic encounters and full of folklore, novels, movies etc. But back then, Fausett had lived this life among the buildings in this mural and knew these people. This mural is an authentic historical record of actual people (whose names are written below their portraits), buildings, customs and the process of taming the Wild West. The mural is a documentation of the pioneer settlers, the beginnings of society in the newly constructed town and the development of the area and its industries.

35 years ago my painting conservation career in the USA (I studied and started working in Italy) started in Utah and I’ve known Lynn Faucett’s painting style, having worked on the restoration of his paintings previously and looked at many others. And to tell you the truth, I wasn’t previously impressed with his painting style compared to the other Utah Impressionists that came before him.

1st Mormon settlers and church organization in the area

When I first saw this mural, I was surprised… this mural may have been the masterpiece of his early career. The faces were very well done and reflect feeling and expressions that were quite realistic.

This mural was considered so well done and so historical that it was a main reason why the entire WPA funded building was added to the US Register of Historic Properties, a considerable honor… but then something happened…

Fausett was employeed to “touch up” the murals in the 1960s and, as is almost always the case, artists don’t respect the qualities of the earlier work and has to change or update it. This happened on this mural when Fausett repainted most of the faces and much of the composition. The result was a change in style and, in my opinion, a reduction in the quality of the mural.

The result of Fausett’s repainting in oil, today, is a blotchy discoloration of the retouchings as they have aged at a different rate than the original mural. This is especially noticeable in the sky. Touch up of the seams of the canvas glued to the wall are discolored as are many other details.

Entrance lobby to City Hall for Price, Utah with the panorama murals by Lynn Faucett 1938-1941

It is presumed also that he varnished the murals, and likely didn’t clean them first. So, a gray layer is trapped. Then add to that the following 40+ years of grime deposited on the surface and that brings us to today’s appearance: considerably muted, flattened depth of field and contrast in the composition and an overall grayish appearance.

Fine Art Conservation Laboratories is honored to have been called and entrusted with the health and art restoration of this historical mural, so important to the City of Price and to the area. We removed the last 40+ years of grime which brightened the painting considerably, without risk to the paint layers. However, we were hesitant to remove the old varnish as, according to preliminary tests, it would be hard to remove without damage to the original paint and would result in disturbing the retouchings that Faucett put on the mural in the 60’s thereby opening the proverbial “can of worms” during the cleaning and causing a real mess, even seriously damaging the mural. 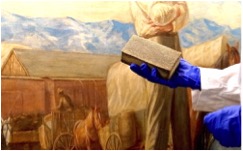 Removal of deposits, pollution and grime from the mural

Water damage infiltrations have occurred in the last years that have stained the front of the painting in several areas. So, these areas were cleaned. Then whatever was left of the stains and all of the blotchyness of Fausett’s retouchings were glazed and toned to blend in better and not be noticeable. We never do retouching in oils for the very reason now noticeable from Fausett’s 1960’s work. All of our materials are conservation grade, chemically stable, reversible materials that will be easily removable without damage to the original painting far into the future. 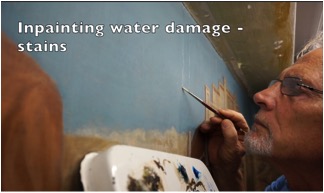 Our varnishes are also conservation grade and have gone through extensive testing to determine their reversibility and removability, color fastness and compatibility with the work of art. They will not yellow and will always be easy to remove.

In the end, we have stabilized the deterioration of the painting, returned it to it’s best appearance and protected it for many generations into the future… which should help make some more history. I love my job. It feels like my work is socially conscious!

If you would like to know more about our background

See our mural conservation videos on YouTube at https://www.youtube.com/playlist?list=PLE1FF71CC598A8E79 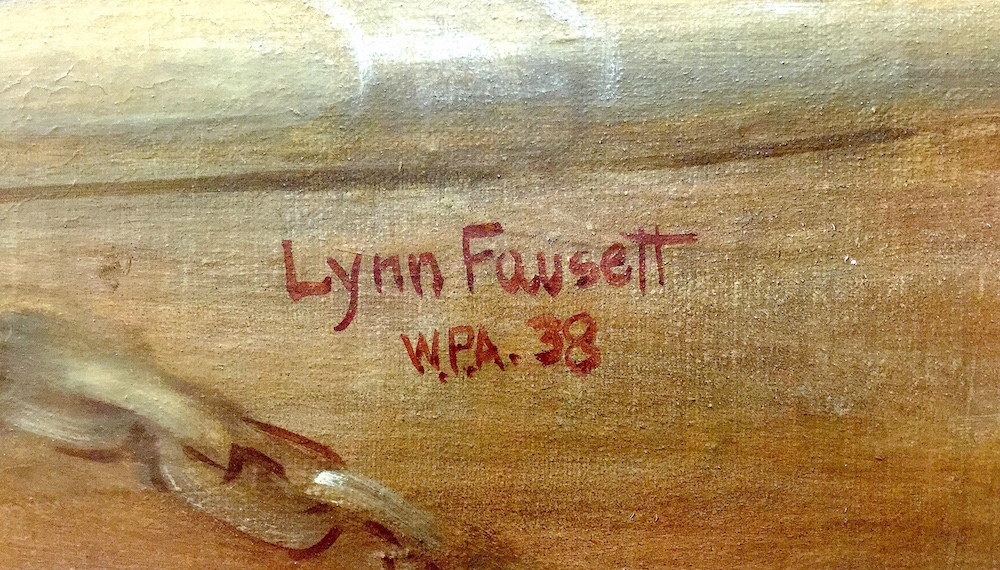 Please leave a comment and give this article a THUMBS UP!

It helps the search engines find us. Thanks!

Scott Haskins has been in professional art conservation since 1975, specializing in the conservation/restoration of easel paintings, murals and art on paper. FACL, Inc. is known nationally for doing A+ work no matter the size or difficulty of the project. We are happy to do a quick cleaning on a family heirloom. Our client list and resume is also full of very satisfied clients of large, difficult/complicated projects at remote locations. Excellent services are also available as an Expert Witness/Legal Testimony in art related matters. Consultation on art related projects occur regularly including extensive insurance evaluations for insured or insurer. Services are offered worldwide. Scott M. Haskins is also author of the "Save Your Stuff" series, educational information, materials and supplies to help people protect and save their treasured family heirlooms and collectibles at home and office. He can be reached at 805 564 3438. Video and written testimonials at https://www.fineartconservationlab.com/testimonials/
View all posts by Scott M. Haskins →
This entry was posted in Historic Buildings - Construction Sites, Murals, Travel and tagged expert mural restorer, mural conservation project consultant. Bookmark the permalink.