Its story of earthquake destruction and its art conservation 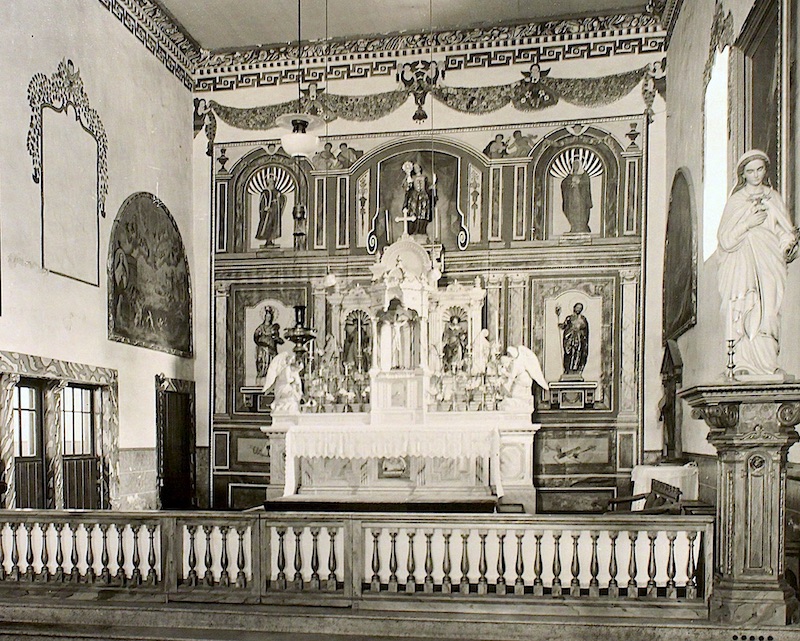 This last year it was with great excitement that a very important historic and exciting decorative element of the original 1786 mission was rediscovered rolled up and unrecognizable in storage. It was the backdrop or type of mural-like theater curtain that was at the front of the chapel to give depth and design to the otherwise flat front chapel wall. The “Lienzo” (Spanish for “canvas” but, in ethnohistory, a lienzo is a sheet of cloth painted with indigenous Mesoamerican pictorial writing) lays out the architecture of a more formal church with Catholic saints, probably painted with indigenous help. What a treasure, an original design element and an important part of the original historical Santa Barbara Mission Chapel!! Cudos to Executive Director Monica Orozco and her team for saving the treasured art feature. But read ahead for the odd story about what happened to this important element of the church.

We preserved and restored the original painting commissioned by Father Serra for his tomb which is located in the Carmel Mission Basilica.

The early missionaries in Santa Barbara built three different chapels during the first few years, each larger than the previous one. But, it seems that the early padres were more enthusiastic about the ideas of building than their architectural and structural education was complete. The 1786 adobe mission structure was badly damaged in the 1812 earthquake. In fact, their overzealous construction attempts in San Juan Capistrano, the 7th CA mission completed, were never completely remedied in the main church and the earthquake damaged vaulted apse still remains, today, open to the sky and never rebuilt after several tries to get it right.

It was only after the Santa Barbara earthquake on December 21, 1812, that the construction on the current SB Mission, as we see it today, was begun. It was completed and then rededicated in 1820. 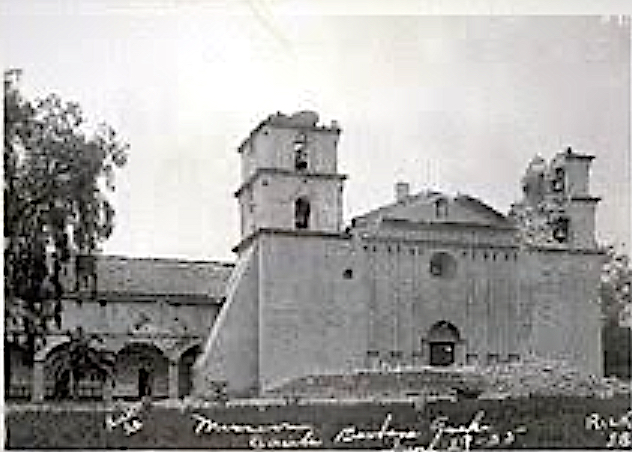 Another earthquake about 90 years later in 1925 inflicted serious damage to the towers, the façade and the chapel which were subsequently rebuilt by 1927 but the appearance of the inside of the church has not been altered significantly since 1820.

Santa Barbara Mission Museum Emeritus, Kristina Foss suggested, “(The lienzo) may be from the earlier church as the canvas greyed-blue color matches that of the canvas covered altar of 1789. They seem to me to be a set. It was, apparently, part of the 1820 rebuild design.”

Disaster struck in 1925 with the earthquake that resulted in massive damage to the building and resulted in the mural sized lienzo being badly damaged. So what happened afterwards to this important part of the chapel?

After removal from the church in 1925, several seminarians, unaware of the importance of the now 150 year old historical architectural element, used part of the canvas for a boat sail! The story goes that the boat promptly sank and those sections of the lienzo were lost. 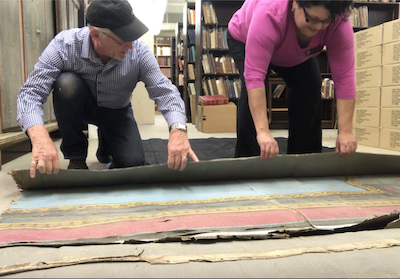 The remaining sections of the rolled up, crushed antique mammoth backdrop were then left in storage. When the archive was built, these were placed in the present basement in which they, over the decades, were frequently moved around as Facilities revamped space use from time to time. 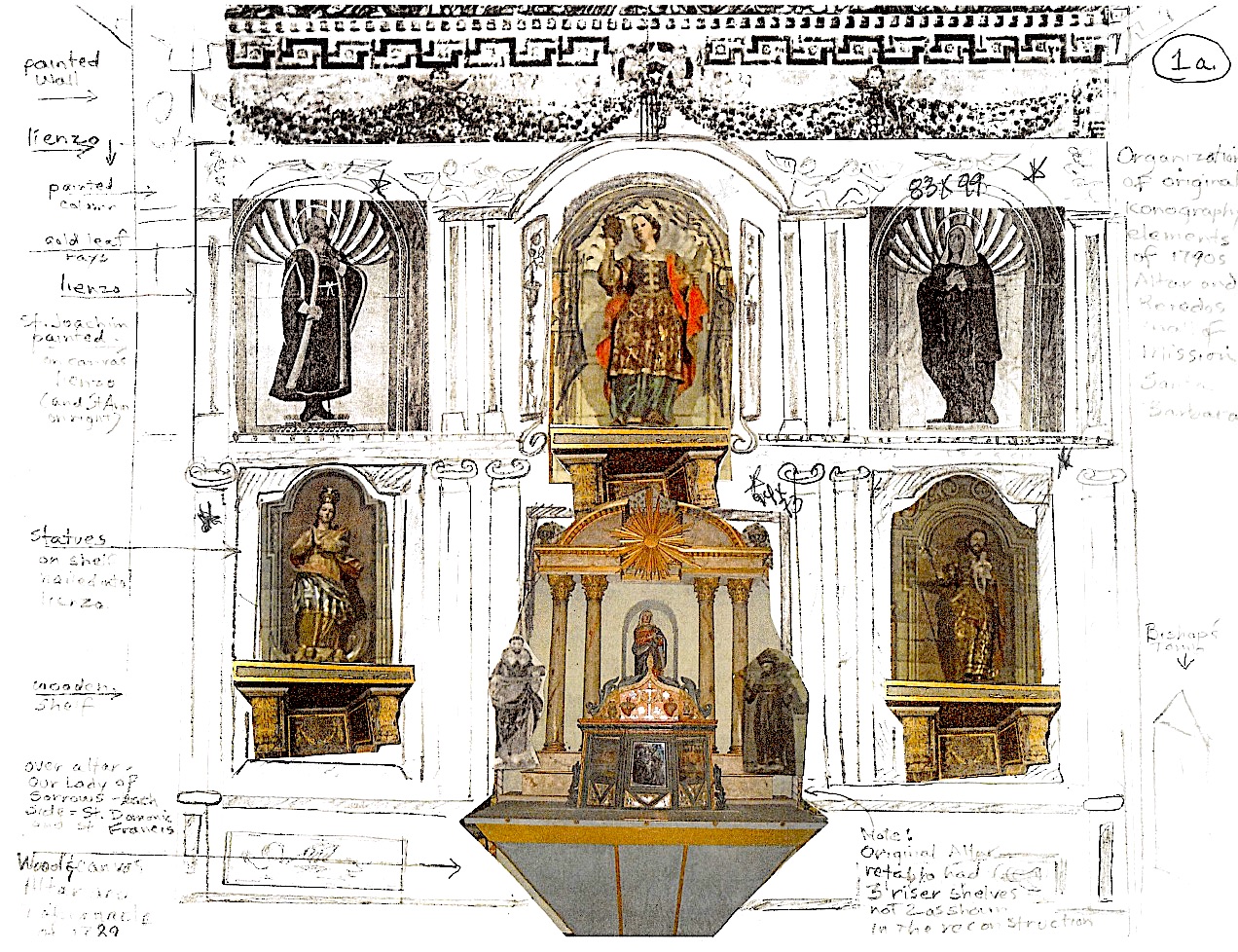 Architectural drawing of design and layout of the original 1786 Lienzo

Here is a good “take-away” from this story

if you are involved with managing a collection of artwork

When something is in bad condition, you may not need to do a complete restoration all at once. For minimal money, perhaps, the item may be stabilized only, saving the total restoration for later when funds are available. Here is what happened next on this project:

A couple of years ago, SBMAL Executive Director Monica Orozco contacted Fine Art Conservation Laboratories to assist in planning the preservation process required for the important artifact. Given the extensive flaking of paint, the many cracks, rips and missing pieces, it was agreed upon to do only emergency services at first to stabilize the condition. In fact, all 5 of the sections of the entire Lienzo were consolidated for only $1,000.00 and then stored in a protective way for secured handling. 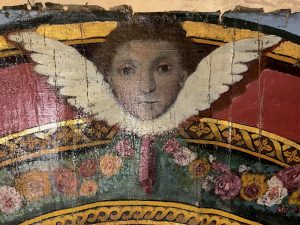 Since what remains of the original Lienzo cannot be exhibited in its complete form for many reasons, each of the 5 sections will undergo painting restoration treatments in different intervals for use in smaller chapels and venues instead of being placed at the head of the main chapel which used to cover the entire wall like a mural.

Plans are underway now to place the first 8′ x 12′ section of the Lienzo to be treated together with an original 1785 alter in a small chapel next to the museum. The others sections will be stored safely for future considerations. More to come on this set up.

Mission Santa Barbara is the only mission to remain under the leadership of the Franciscan Friars since its founding, and today is a parish church of the Catholic Archdiocese of Los Angeles. 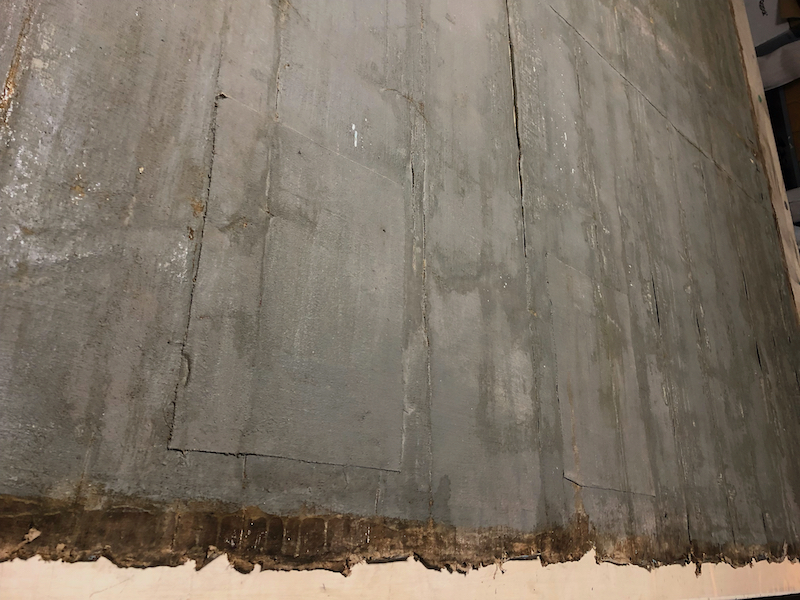 Back of the 1786 Lienzo painted, broken, ripped

Fine Art Conservation Laboratories is honored to be part of this historic preservation work.

There are a total of five panels in need of conservation, costing close to $100,000 for the entire project. We are focusing on one panel at a time to make the project manageable and we are currently $3,000 away from raising the funds for the panel that will be installed in the museum to be on display with the original Mission church altar.

If interested in supporting this project, donate today at https://www.santabarbaramission.org/online-donation/ and select the Lienzo Conservation Project in the drop down. 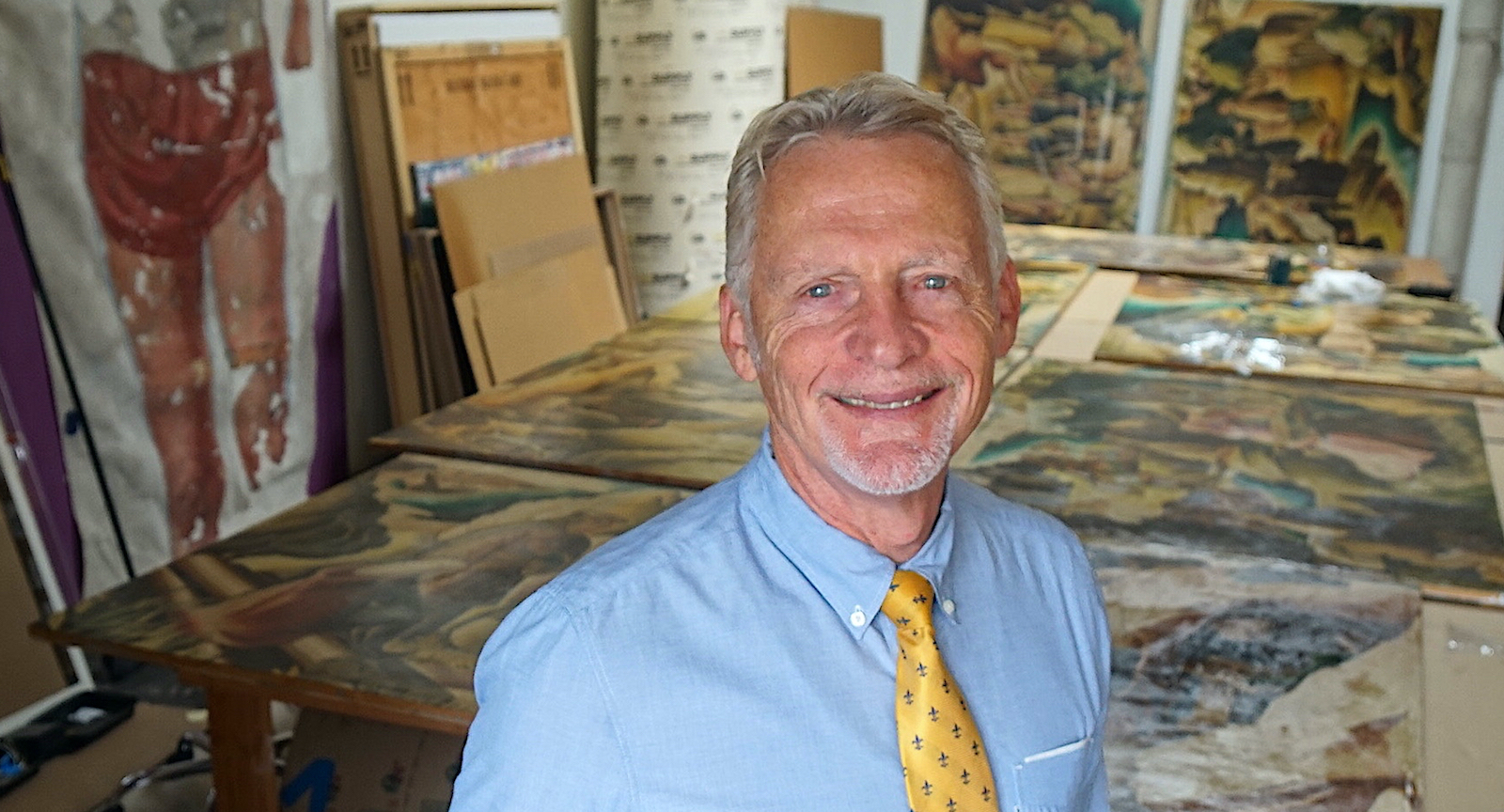 Scott M. Haskins in the lab with WPA murals 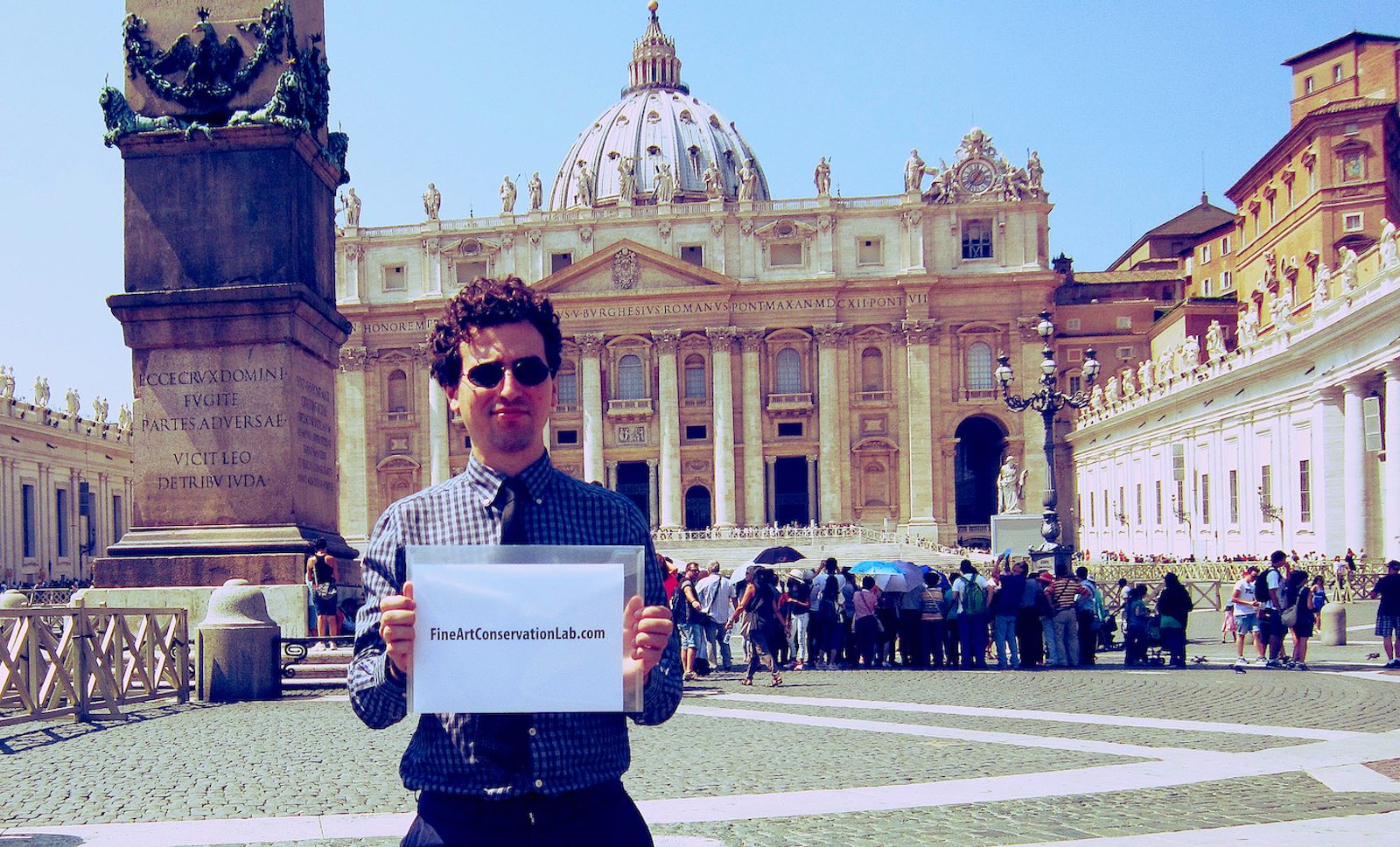 Scott Haskins has been in professional art conservation since 1975, specializing in the conservation/restoration of easel paintings, murals and art on paper. FACL, Inc. is known nationally for doing A+ work no matter the size or difficulty of the project. We are happy to do a quick cleaning on a family heirloom. Our client list and resume is also full of very satisfied clients of large, difficult/complicated projects at remote locations. Excellent services are also available as an Expert Witness/Legal Testimony in art related matters. Consultation on art related projects occur regularly including extensive insurance evaluations for insured or insurer. Services are offered worldwide. Scott M. Haskins is also author of the "Save Your Stuff" series, educational information, materials and supplies to help people protect and save their treasured family heirlooms and collectibles at home and office. He can be reached at 805 564 3438. Video and written testimonials at https://www.fineartconservationlab.com/testimonials/
View all posts by Scott M. Haskins →
This entry was posted in Murals, Painting on canvas and tagged Santa Barbara Mission. Bookmark the permalink.